Engineers have transformed items of cloth into wearable devices that are resistant to machine washing and powered wirelessly through a flexible, silk-based coil sewn on the textile.

Worldwide, engineers are working toward so-called smart clothes that feature miniaturised electronic circuits and sensors that allow the wearer to communicate with phones, computers, cars and other machines.

Such smart clothing is expected to make people more productive, provide checks on the wearer’s health status, and even send alerts in the event of an accident. A major drawback to the development of these devices is machine washability.

Now, engineers at Purdue University have developed a new spray/sewing method to transform any conventional cloth items into battery-free wearables that can be machine washed. This technology is published in the May 25 edition of Nano Energy.

“By spray-coating smart clothes with highly hydrophobic molecules, we are able to render them repellent to water, oil and mud,” said Ramses Martinez, an assistant professor in Purdue’s School of Industrial Engineering. “These smart clothes are almost impossible to stain and can be used underwater and washed in conventional washing machines without damaging the electronic components sewn on their surface.”

According to Purdue, the rigidity of typical waterproof garments and their reduced breathability make them feel uncomfortable after being worn for a few hours.

“Thanks to their ultrathin coating, our smart clothes remain as flexible, stretchable and breathable as conventional cotton T-shirts,” Martinez said in a statement.

Unlike common wearables, the Purdue smart clothes do not require batteries for powering. By harvesting energy from Wi-Fi or radio waves in the environment, the clothes are capable of powering the circuitry sewn on the textile.

One example from Purdue is a battery-free glove that illuminates its fingertips every time the user is near a live cable to warn about the possibility of an electric shock. Another is a miniaturised cardiac monitoring system sewn on a washable sweatband capable of monitoring the health status of the wearer.

“Such wearable devices, powered by ubiquitous Wi-Fi signals, will make us not only think of clothing as just a garment that keeps us warm but also as wearable tools designed to help us in our daily life, monitor our health and protect us from accidents,” said Martinez, who is affiliated also with the Weldon School of Biomedical Engineering in Purdue’s College of Engineering.

“I envision smart clothes will be able to transmit information about the posture and motion of the wearer to mobile apps, allowing machines to understand human intent without the need of other interfaces, expanding the way we communicate, interact with devices, and play video games.”

Purdue added that the technology can be fabricated in conventional, large-scale sewing facilities, which are expected to accelerate the development and commercialisation of future smart clothes. 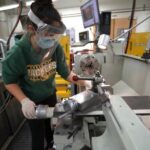