Rolls-Royce has been awarded $1m of research funding from the US Navy for its FanSense digital foreign object debris (FOD) on-engine detection system.

According to Rolls-Royce, FanSense analyses the shaft speed signal of an engine and detects any disruptions that arise as a result of a small object, such as stones or screws, striking an engine fan blade.

The technology, applied as part of a wider service offering, will allow customers to detect much smaller debris entering the engine, enabling them to build a clearer picture of FOD damage and engine wear over time. In turn, this will help to identify airfields that need to improve their FOD prevention practices.

In a statement. Paul Craig, president of Defence Services, said: “FanSense is an innovative and revolutionary Rolls-Royce digital technology being packaged and applied to our products.

“The research funding granted by the US Navy will allow us to further enhance and build upon our pioneering technologies that will enhance safety, efficiency and deliver a cultural change for our customers.”

FOD is estimated to cost the global aviation industry billions of dollars per year in damage and disruption. The vast majority of ingested debris currently goes undetected. Rolls-Royce will continue to work with a long-standing industrial partner, Roke, whose engineers will apply their knowledge of signal processing to detect FOD impacts on fans for FanSense.

The FanSense technology adds to Rolls-Royce’s portfolio of FOD prevention solutions that include the FOD App, the FOD cloud data analysis service and FOD officers. Rolls-Royce’s vision for FOD technology is to build a digital system that is able to predict FOD events before they occur by analysing data collected from the app and using vehicle tracking sensors and debris tracking radars.

FanSense completes the system by determining the exact time and location of historic FOD events, which will enable customers to predict the conditions in which ingestion of a harmful object is likely to occur.

The post Rolls-Royce awarded $1m for FanSense research appeared first on The Engineer. 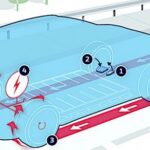