Researchers at Germany’s Fraunhofer Society have developed a new type of microscanner mirror that integrates with LiDAR to provide autonomous vehicles with boosted 3D vision.

The MEMS scanner is made of monocrystalline silicon, which has a reflective coating that intensifies the LiDAR’s ranging lasers. The more light captured by the sensor, the more accurately the distance to the object can be determined. Positioning technology integrated with the scanner’s chip allows it to continuously track where the mirror steers the laser beam and which position is being measured.

“LiDAR systems are able to scan the surrounding area in three dimensions and therefore detect pedestrians, cyclists or other vehicles. Our MEMS mirror splits the laser beam in two dimensions and focuses the light on the object that is being measured. By measuring the time of flight of the reflected light, it is also possible to determine the distance to the object as a third dimension.”

The new technology is already being used by AEye, a San Francisco-based company that specialises in advanced computer vision for autonomous vehicles. According to Fraunhofer IPMS, the US tech firm has integrated the new mirror into its 4Sight LiDAR sensor. The microscanner mirrors function at wavelengths typical for LiDAR applications of 905nm to 1,550nm, with the aperture size having a significant impact on operating range. Paired with the smart LiDAR sensors from AEye, ranges of over 200m are possible, according to Grahmann.

“Our MEMS mirrors are typically up to 5mm in size,” he said. “For specialised applications, larger mirrors are an option; but with increasing size, you lose the benefits of MEMS. Alongside the microscanner mirrors, we also supply the requisite packaging and the drive electronics. All components can be designed to customer specifications, thereby guaranteeing that they can be integrated in different LiDAR systems. We also develop, for example, MEMS scanners for head-mounted displays and industrial robots.”

According to the Fraunhofer team, the next step will be to produce the microscanner mirrors in larger volumes and to prepare the technology for mass production. 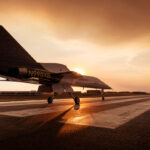