Researchers in the US have published a study detailing Amazon EcoVistas, a new computational tool for guiding sustainable dam siting to protect ecosystem services.

Rapid hydroelectric dam expansion in the Amazon poses a serious threat to Earth’s largest and most biodiverse river basin. There are 158 dams in the Amazon River basin, with another 351 proposed. These projects are typically assessed individually with little coordinated planning.

Published in Science, the new study provides the first computational approach for evaluating basin-level trade-offs between hydropower and ecosystem services.

Co-author Stephen Hamilton, an ecosystem ecologist at Cary Institute of Ecosystem Studies explained: “Continued hydropower development in the Amazon is inevitable. So how can that proceed in a way that optimises energy output at the lowest environmental cost?

“The answer comes in selecting projects strategically, taking into account multiple environmental criteria that have thus far been too difficult to account for simultaneously in planning large numbers of potential projects.”

Hamilton, with an interdisciplinary team of environmental and computational experts, developed ‘Amazon EcoVistas’, which is a novel framework to analyse proposed dam projects collectively, both for their energy generation and impacts on the environment.

“Our tool allows us to evaluate hydroelectric projects for their collective impacts to nature and people on the scale of the entire watershed – a rare, yet critical approach, since the Amazon River and its tributaries flow through multiple countries with diverse topography,” said co-author Rafael Almeida, a former visiting graduate student at Cary and current assistant professor at the University of Texas, Rio Grande Valley.

The tool can also screen out particularly harmful projects. Almeida added that fragmentation of river systems, blockage of fish migrations, trapping of sediment and emission of methane are all worsened by absence of basin-wide planning.

Running the ‘Amazon EcoVistas’ algorithm on the 158 existing and 351 proposed dams created scenarios based on all possible combinations of these projects. This allowed it to determine the ‘Pareto-optimal frontier’ — or combination of hydropower projects that minimises negative environmental effects for any given level of aggregate hydropower output.

This process is extremely computationally intensive, researchers said; between the 509 total projects, there are 2509 (or ~10153) possible combinations – with six dimensions (energy output the five environmental criteria) evaluated for each.

By identifying opportunities for more sustainable hydropower development, the team believes Amazon EcoVistas could prove useful to energy planners, decision makers, and researchers working to implement strategic, whole-basin dam planning. It could also help evaluate priorities for dam removal in regions with aging dams such as North America and Europe. 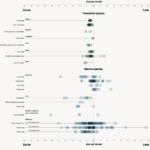 An ‘emerging crisis’: The climate is changing too fast for plants and animals to adapt