The trees were not coming back. In the years following the 2000 Walker Ranch Fire, Tom Veblen, a forest ecologist at the nearby University of Colorado, Boulder, saw that grass and shrubs were regrowing in the charred foothills, but he had to search to find the rare baby version of the tall ponderosa pines that had dominated the area before the fire.

“I kept watching and I was barely seeing any seedlings at all,” Veblen said.

One of his graduate students at the time, Monica Rother, who now leads her own lab at the University of North Carolina at Wilmington, took a closer look, formally sectioning off research plots and returning year after year to count little trees. More than a decade after the Walker Ranch Fire most of her plots had zero tree seedlings.

Now that the winter has cooled the 2021 fire season, scientists are looking at the big burn scars across the West with the grim understanding that, in some places, the pine and Douglas fir forests will not return.

The driving force here is that the rising global temperature is wiping out seedlings. In many spots around the U.S. West, summer temperatures are already high enough to cook young trees before they can develop thick protective bark. Others have become so dry that seedlings shrivel before their roots can grow deep enough to reach groundwater. Both circumstances can thwart forest regeneration. Mature trees can survive in these areas long after they stop reproducing. But when fires wipe out these forests and seedings can’t get a foothold, they are replaced with grasses and dense brush.

When Veblen told the Forest Service about his early observations, around 2003, officials shrugged off the concern. Back then, during President George W. Bush’s administration, the idea that climate change was already producing changes was still somewhat taboo. It would probably just take a few years for trees to get reestablished, the government foresters said.

But over the years, the evidence piled up. And new research has cemented the scientific consensus that climate change is making it much harder for forests of Western mountains to return after fires.

Kimberley Davis is a plant ecologist at the University of Montana and the lead author of an influential study on how climate change is altering forest regeneration after fire, published in the Proceedings of the National Academy of Sciences. In her research, she found site after site where new climatic conditions no longer supported the growth of young pines. Adult trees can survive in conditions that kill their seedlings, but they have no future: Like the humans in the science-fiction movie “Children of Men” they’ve outlived their ability to reproduce. With no seedlings, when a fire eventually passes through that is strong enough to wipe out mature trees, it means the woods are gone for good.

When trees fail to regenerate after a fire, new plants take their place. To generalize, in the northern Rocky Mountains, it’s a mix of grasses and shrubs of the genus ceanothus — like snowbrush. In parts of the Southwest, juniper and oak savannas replace pine forests. In New Mexico, thorny locusts often dominate. In northern California, its dense hip to head-high thickets of manzanita and ceanothus. The general trend: fewer forests, more shrublands.

Examples of this ecological shift abound. Twenty years have passed since the Valley Complex Fire burned down the mature forests in Bitterroot National Forest in Montana, and yet there are no signs of young trees returning to the big swaths of landscape. Sixteen years after the Peppin Fire in Lincoln National Forest in New Mexico, it appears the pines are gone for good in many places, replaced by scrubby Gambrel oaks that can survive in the hotter conditions. After the 2007 Moonlight Fire in Plumas National Forest, dense stands of chaparral whitethorn and greenleaf manzanita grew back, rather than trees.

“It’s already happening, it’s not just something we are modeling in the future,” Davis said. “We are definitely at a point where we are all noticing significant impacts of climate change in terms of lack of forest regeneration across the West.”

One study, published last year, found that if forested areas in the Rocky Mountains burned, just half would recover well. It’s generally the south facing slopes and the fringes, where woods meet the plains, that can no longer nurture young pine and fir trees, because those are the parts of forests with the highest temperatures, said Kyle Rodeman, the lead author of that paper, and a scientist studying forest recovery at Northern Arizona University. Southern slopes get more sun in the northern hemisphere, which makes them hotter and drier. And the low-elevation edges of forests mark the line where conditions become inhospitable for trees — with smaller plants in the hotter lowlands, and trees appearing at higher, cooler elevations. It only makes sense that these spots have been the first places forced over the tipping point, into conditions unsuitable for forests, as climate change has turned up the heat. As the years pass, those unsuitable conditions for forest creep uphill.

We’ve long known that it takes water and cool weather to support mountain pine forests. “In a way you would say, ‘Duh, what did you expect? Under warmer drier conditions you are going to get fewer forests,” Veblen said. But it took time to document, and back up the logic with data. At this point, he said, “there’s really no resistance to that idea anymore.”

Today, land managers are scrambling to slow the transformation in many places, by planting trees and killing shrubs. For instance, the Forest Service has proposed a plan to wipe out brush with herbicides in Plumas National Forest. There, climatic conditions would still allow young trees to survive, if they were not crowded out by fast growing shrubs, experts say. When fires enter forests every few years, they tend to burn gently, creeping along the ground and clearing out plants that compete with young trees, without killing the mature ones. But in a landscape dominated by brush, fires burn hot, wiping out the remaining trees and favoring the scrubby species that can quickly grow back. It looks like that’s exactly what happened when the 2021 Dixie Fire swept through the brushy areas created by the 2007 Moonlight Fire. By clearing the brush, the Forest Service hopes to give trees a chance to tip the ecosystem back into a self-sustaining forest.

These efforts to control habitats can succeed in areas teetering on the edge — where temperatures are still low enough to allow a few young pine trees to take root. But they don’t control the most important variable determining the fate of these forests: “The earlier we start dealing with the root problem, climate change, the better chance we have,” Veblen said. “If you want to keep these forests, keep fossil fuels in the ground.”

This story was originally published by Grist with the headline Wildfires are erasing Western forests. Climate change is making it permanent. on Nov 29, 2021. 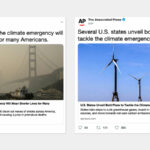 Calling climate change a ‘crisis’ doesn’t do what you think
Thales, Diehl to develop flight control computers for CityAirbus