On stormy days—and sunny days too—residents of Jacksonville, Florida watch water filling the streets, rising up to stop signs, and spilling onto front stoops and into parked cars.

As a result, annual flooding damage currently costs homeowners and insurance companies $20 million per year nationally, with economic losses concentrated in Florida and California. As storms grow stronger and sea level rises, that damage is on track to reach $32 billion annually by mid-century. But for residents here, the wreckage — measured in family members lost, and homes and heirlooms too damaged to recover — can hardly be quantified.

For some living in the McCoys Creek watershed, a historically Black part of Jacksonville, witnessing floods again and again in the same places feels like Groundhog Day. “We come out just to see who’s next,” resident Nicole Newsome told CBS Action News Jax in March 2022, after two people were rescued from cars swept away by flood waters at the corner of McCoys Creek Boulevard and King Street.

Jacksonville’s flooding is a result of a century of attempts to tame and channel the St. Johns River and its tributaries, such as McCoys Creek and Hogans Creek. Some of these interventions have tried to channel water in certain directions, while others have tried to constrain its flow for the sake of efficient shipping and expanded development. With its waterways constricted, and its lowlands filled in, by the 1950s, industry set up shop on the city’s higher ground. Draper’s Egg & Poultry Company built a chicken processing plant and The E.O. Fertilizer Company set up a factory near where McCoys Creek meets the St. Johns River, releasing chemicals and further destroying native ecosystems. In addition to this industrial pollution, which disproportionately impacted residents living nearby, today, these blacktopped areas can no longer absorb storm waters.

After decades of mismanaging flood risks, residents and local grassroots organizations are now working with city officials to finally take a markedly different approach. Gloria McNair, the manager of community engagement and equity for Groundwork Jacksonville, is leading an effort to rehabilitate McCoys and Hogans creeks. She hopes to develop a remediated green space that connects city neighborhoods through what’s known as the Emerald Trail: 30 walkable miles that will encircle the urban core.

For many living in Jacksonville, the plan, which began in 2014 with a feasibility study, was seen as a long-needed shift from a water management model focused on building more barriers to one that embraces the natural power of waterways and their surrounding ecosystems. But some residents feared the improvements would have unintended consequences. “‘Do you think once there’s this beautiful trail right here outside my home, that they’re going to allow me to stay here?” McNair recalls one resident of North Riverside, a Black neighborhood near McCoys Creek, asking her.

Residents’ skepticism was well-founded. “These are people who’ve already had unfortunate things occur,” McNair said. Many Black residents living in neighborhoods along the proposed Emerald Trail have borne the brunt of prior planning and redevelopment efforts, including residents whose properties were redlined or who were displaced in the 1950’s by highway construction. Green infrastructure efforts elsewhere, like trails and parks built in East Boston and in South Philadelphia, have restored waterways and enhanced overall cities’ resilience to climate change, but also raised property values, property taxes, and displaced Black and Latino residents — a phenomenon that scholars have coined “climate gentrification.”

For the trail restoration and flooding prevention plan to deliver its intended social benefits, McNair realized, it would be essential to focus on a deep commitment to helping residents stay in their houses and communities, and to engaging residents at every single step of the planning process. At their core, McNair says, “our strategies are anti-displacement strategies.”

So McNair spent time meeting residents in their homes, learning about their concerns, such as not being able to afford home improvements. Seeing that McNair and Groundwork Jacksonville were responsive to feedback, rather than solely focused on their own agenda, residents grew increasingly involved. Meeting numbers rose from the single digits to the hundreds. McNair developed a survey to guide a 10-year neighborhood vision for equitable development. The results showed that residents were concerned about maintaining the neighborhood’s character and history during any creek restoration; how to obtain funding for housing and home repair; wanting access to employment opportunities; and developing strategies for improving environmental stewardship. The plans to bring the Emerald Trail to life now include home improvement help, job training, and access to experts on property tax exemptions and other programs designed to ensure that residents are not displaced and can prosper from the economic benefits of the redevelopment effort.

Over the past five years, the same residents who were once skeptical about the project have become the Emerald Trail’s greatest advocates. At a recent event called Creek Fest, many offered feedback on proposed designs of the Emerald Trail system. Six local residents have served as technicians to perform water monitoring on McCoys creek, and a team of three residents serve on the McCoys creek task force, which meets with city officials and architects to ensure that residents’ desires for amenities and how they’d like to interact with the creek are included as plans evolve. The effort is a prime example of the kind of approach that could be significantly amplified by funding from the Biden administration’s Justice40 commitment, which mandates that residents living in “disadvantaged communities” receive the benefits of at least 40 percent of federal investment in clean energy and climate resiliency projects.

Directly and meaningfully involving residents has also improved the city’s overall safety. When providing feedback on designs, residents pointed out that while permanently closing some streets by creating cul de sacs to let the creek expand would be beneficial, closing off certain overpasses could trap residents in the event of a flood — a block-specific dynamic that planners were not attuned to. “When we talk about public private partnerships, that [should] include residents, the stakeholders of the community,” McNair said. “You need to have their input, their feedback and their support when you’re moving forward, especially in a project that’s going to affect them so directly.”

Since those two cars were swept away by floodwaters on McCoys Creek Boulevard in March, the city has made progress in its new approach to floodwater management. A major stretch of the boulevard that ran parallel to the creek has been removed, creating a natural, roadless flood basin to be buttressed by grasslands, palms, and cypresses. The Emerald Trail is due to be completed in 2029, providing climate resilience and social benefits to an area that’s long grappled with racist policies and decades of disinvestment.

Along the connecting green ribbon, “there will be a way to walk and talk and visit and get to know each other again,” McNair said.

River Network is the only national nonprofit whose sole purpose is to connect and strengthen the efforts of water leaders affiliated with over 8,500 local groups, agencies, tribes, and utilities working for healthy rivers and clean water across the US. We elevate equity across all our work, and for 30 years, we’ve delivered tools, training, financial support, and mentorship, including through leading-edge collaboratives tackling equitable development and urban flooding at the community level.

This story was originally published by Grist with the headline What does community-led climate work look like? on Sep 21, 2022. 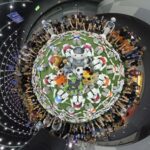