This Huge DIY Workbench Gives You a Hand

As an avid experimenter and builder of random contraptions—and who isn’t the best at putting his tools away and normally has multiple projects in various stages of completion—I often run out of work space. So I decided to build a new workbench. One that would be better, not just because it was bigger but because it would be smarter. A bench that could automatically assist me in getting things done!

In my garage I previously had two main work spaces: a 183-by-76-centimeter butcher block that also houses a small milling machine, and a custom 147-by-57-cm work space with a built-in router that pops out as needed. Though this space is generous by most standards, it seems I always needed “just a bit” more. After some consideration, I purchased a 2x4basics custom workbench kit (which provides the bench’s heavy-gauge structural resin supports) and lumber to form the main structure, and then cut slabs of chipboard to form a top and a bottom surface.

I decided on building a 213-by-107-cm bench. This was the largest space that I could reasonably reach across and also fit in my garage without blocking movement. The 2x4basics kit came with shelves, providing space for plastic storage boxes. At this point, I thought I was done, because surely this bench would be simply something that I built and used—a background thing that needs no more mention than a screwdriver or hammer would.

As it turns out, I can’t leave well enough alone. The initial tweaks were small. To enhance the bench’s storage, I added magnets on which to hang various tools, and augmented my existing storage cases with 3D-printed dividers. Then I added an eyebolt for my air compressor—a fabulous tool for its roughly US $40 price—to keep it at the ready for blowing off excess material. Toward the back of the bench rests a hot-air gun and a soldering station, as well as my bag of other electrical tools. 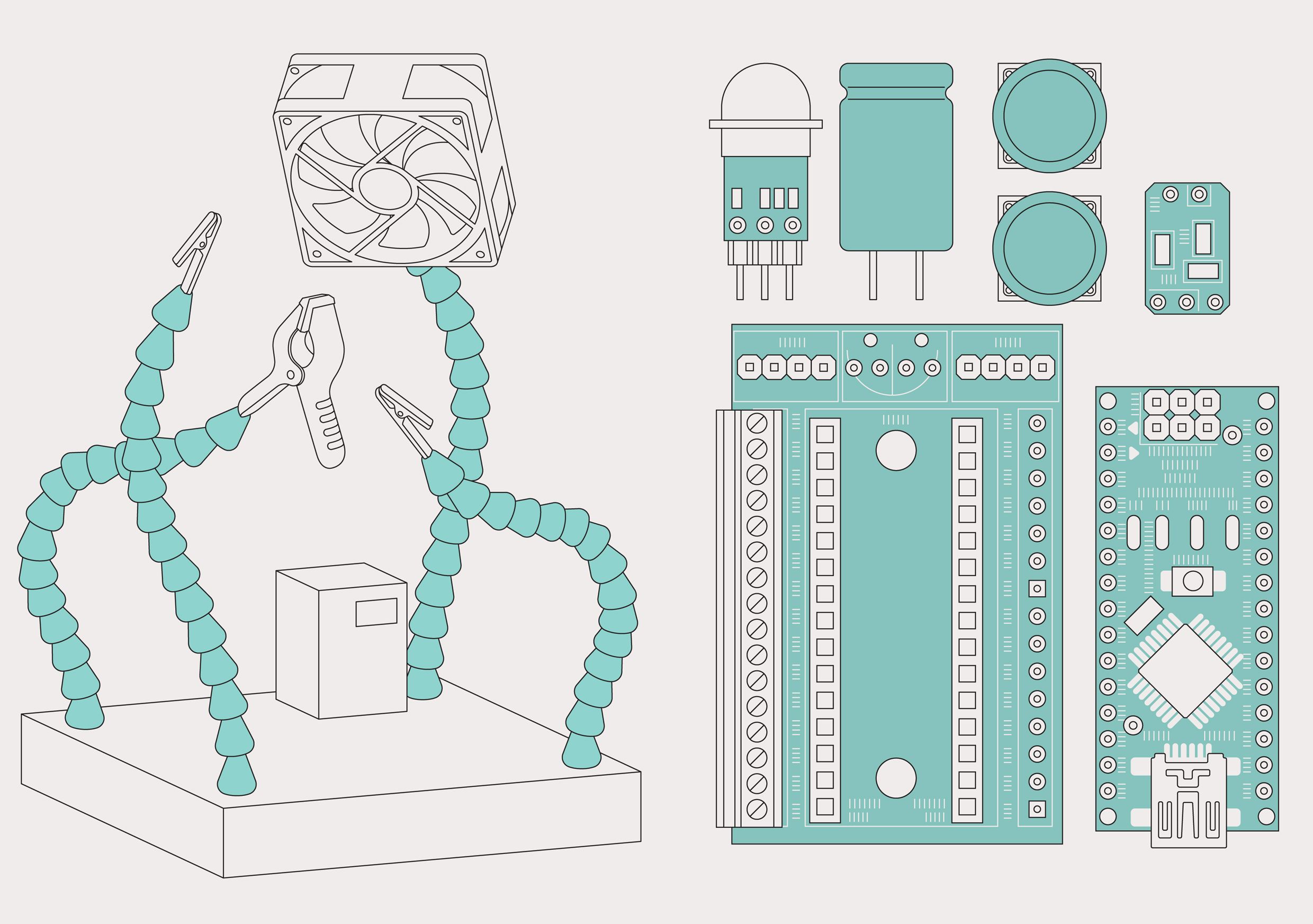 The solder squid (left) uses an EZ Fan board and a motion sensor to control a fan. The bench lights are controlled using an Arduino Nano (far right)inserted into another custom board, the Grounduino (middle), which also provides a dedicated space for the recommended large capacitor when driving addressable LED strips.
James Provost

Then things got more complex. I added a DIY solder squid—a block with four flexible arms that I use to hold components in place while soldering—with a concrete base and an automatic solder fume extractor.

Yes, my solder squid is made out of concrete, via a 3D-printed mold—though that last refinement is perhaps optional. You could make nearly the same sort of brick using a plastic storage container. Heavy, cheap, and nonconductive, concrete is the perfect base material for such a device, and for arms you simply need to stick a few coolant lines in while the concrete cures. Two of the arms have alligator clips attached, one has a larger clamp, and the third has an old PC fan, recycled for my fume extractor.

I automated the fan by hooking up a rechargeable battery, a USB charger board, and a passive infrared (PIR) motion sensor. When activated by soldering movements, the PIR sensor turns the fan on with the help of a leftover original EZ Fan transistor board. (I created the EZ Fan board to control add-on cooling fans for Raspberry Pi computers, and now sell an even slimmer version.) This means that I don’t ever have to remember to turn the fan on or off: It just comes on when it senses that I’m soldering. I normally keep it plugged into a USB port that provides power, but there is also a battery inside for when a USB port isn’t available.

For light, I initially just used a linkage-based desk lamp with a powerful three-lobe LED bulb. But why stop there? Why not apply strips of LEDs to the underside of the overhead storage? I did just that, pulling out a strip of 12-volt nonaddressable LEDs and powering them with a simple wall power adapter. This gave things a constant glow, but it was only a matter of time until addressable LEDs made an appearance, which would let me illuminate different zones as desired.

I mounted one PIR sensor at the end of a piece of pipe and one in the middle, and then strung a strip of WS2812B RGB addressable lights along the length. I attached this to the overhead shelves with pipe hangers, which let me adjust the lighting angle as needed to complement the static white LEDs. To control both the addressable LEDs and the nonaddressable strip, I used an Arduino Nano plugged into another utility board of my own creation, the Grounduino, and connected another PIR sensor to it, giving me three sensors along the length. The Grounduino provides screw terminals for hooking wires to the Nano and, as the name suggests, five extra ground connections (and five extra 5V connections as well). It also has built-in accommodation for the recommended capacitor that others often forget to use with WSx addressable LED lights. 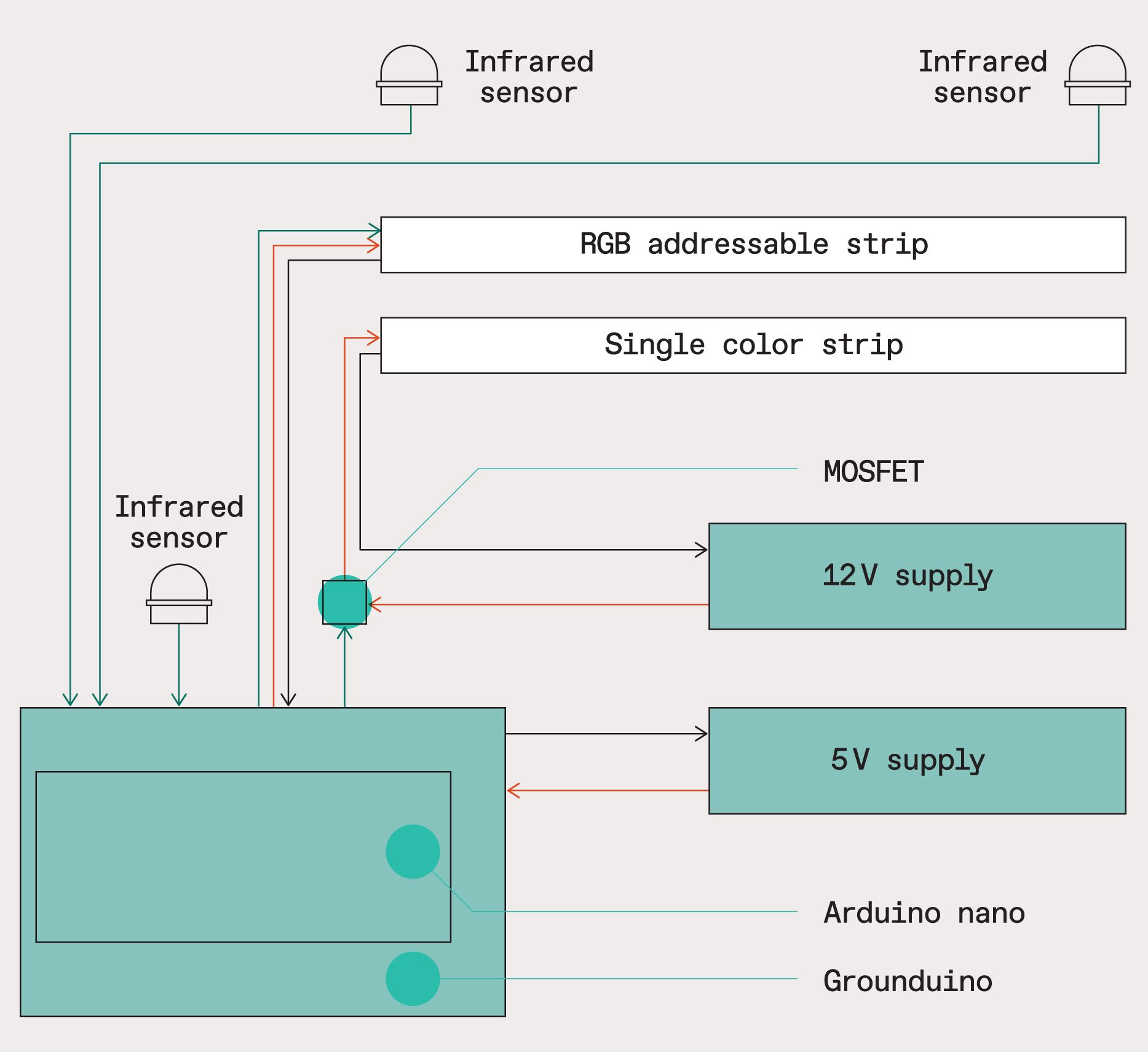 Probably the biggest challenge here was actually fishing the various wires through the length of pipe, but in the end it worked quite well. Three segments of addressable LEDs turn on based on which PIR sensor is triggered, while the 12V nonaddressable strip is powered via a FQP30N06L metal-oxide-semiconductor field-effect transistor (MOSFET) under control of the Arduino (the power required is just a little on the high side for an EZ Fan board). A push-button control lets me alter the brightness of the strips using pulse-width modulation.

If I was starting from scratch, I’d use a single LED voltage, as my setup currently has two power transformers (12V and 5V). Hindsight is 20/20, though it’s very possible this project isn’t quite done yet. I use open-source Home Assistant software to turn on house lights over Wi-Fi, and a homemade ESP8266 contraption to link the same system to my garage door, so why not my bench lights? The Grounduino and Nano were good choices here, but with an ESP8266, I could potentially automate everything and/or control it all with my phone if needed…

However, for now at least, I can finally fit my projects, and my tools, on one bench!

This article appears in the August 2021 print issue as “This Huge Workbench Gives You a Hand.” 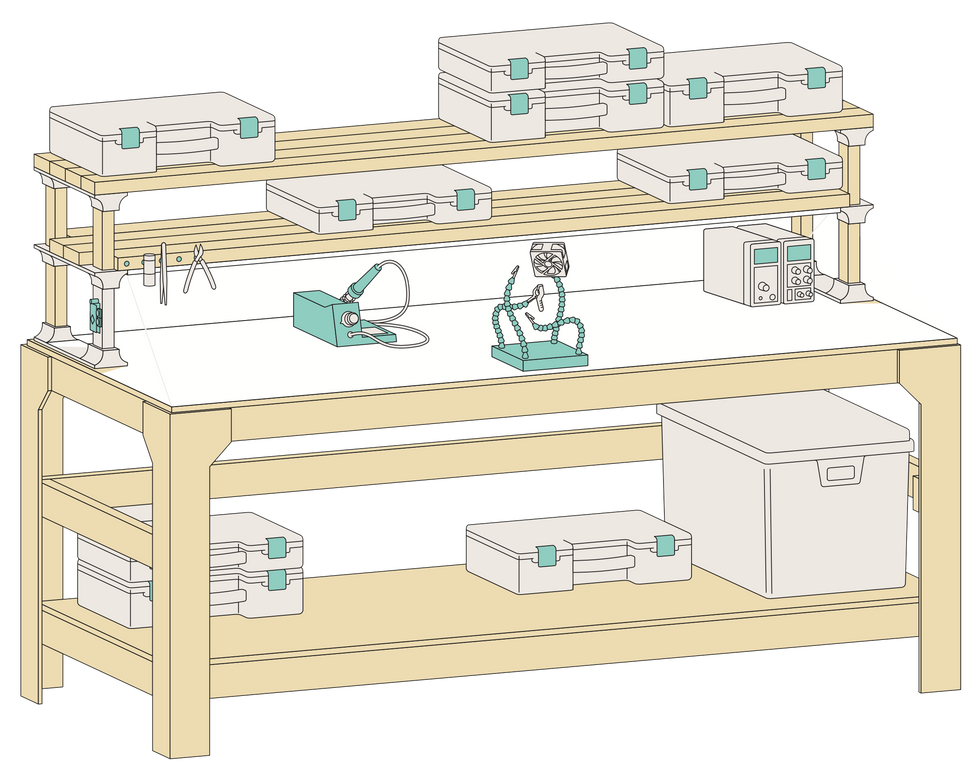 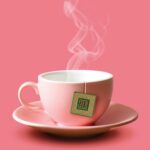 We Don’t Need a Jetsons Future, Just a Sustainable One