The Race for the Next-Gen Space Station

Since November 2000, there has always have been a select few people living apart from the rest of us—the astronauts and cosmonauts on the International Space Station. On any list of humanity’s greatest engineering achievements, the ISS almost always ranks near the top. It is as long as a football field, as spacious as a jumbo jet. It has made more than 123,000 orbits in 21 years.

The International Space Station—originally expected to be completed by 1994 for $8 billion—was completed in 2011 for more than $100 billion. Its mission may be extended till 2030.

The station is slowly leaking air, presumably from stress cracks in its hull that crew members have struggled to locate, and it’s getting increasingly expensive to maintain as parts wear out. NASA is officially supposed to retire the ISS by 2024, though it says that can probably be pushed back to 2030. Meanwhile, it’s trying to get the next station into orbit as quickly as possible.

NASA has now awarded US $415.6 million to three aerospace consortiums to develop a new “commercial low Earth orbit destination.” One team is led by Jeff Bezos’ Blue Origin, another by the satellite company Nanoracks, and the third by the aerospace giant Northrop Grumman. NASA’s plan, for some years, has been for private industry to take over the routine work of space operations, with NASA as “one of many paying customers.” If it works—as it has in the case of SpaceX ferrying astronauts to and from the ISS—NASA says it will save billions of dollars and free the agency to go explore the cosmos.

The Dulles, Va.-based Northrop Grumman has proposed a space station concept that features elements in development for other projects. Note the SpaceX Dragon spacecraft docked at bottom center.

Starlab, from Nanoracks, Voyager Space, and Lockheed Martin, is a free-flying commercial space station concept. The largest module is inflatable.

Artist’s conception of the SpaceX Starship on the surface of the moon. SpaceX has said the same ship can be used for many purposes in Earth orbit and deep space.

“We don’t see, coming out of this, one winner,” says Jeffrey Manber, Nanoracks’ chair and co-founder. “We see, by the end of this decade, multiple, privately owned space stations.”

There is a fourth contender, by the way: Axiom Space, a startup company, signed a contract in 2020 to build at least one new module for the ISS by mid-decade. When the time comes, Axiom says, it would detach its components and reconfigure them with other parts for a new station.

“If the ISS is extended to 2030, this will ensure that we don’t have a gap in our access to low Earth orbit,” said Philip McAlister, NASA’s director of commercial spaceflight.

But the race to avoid that gap may have already been lost—and if that warning seems ominous, it also comes from the space agency’s own in-house watchdog, the Office of Inspector General, or OIG.

“In our judgment, even if early design maturation is achieved in 2025—a challenging prospect in itself—a commercial platform is not likely to be ready until well after 2030,” the OIG said in an audit report. It said that without a working station, “the nascent low Earth orbit commercial space economy would likely collapse, causing cascading impacts to commercial space transportation capabilities, in-space manufacturing, and microgravity research.”

Remember, says the OIG, that the U.S. went nine years between the retirement of the space shuttles and the first SpaceX crew launch. And President Ronald Reagan originally proposed a space station by 1994 for $8 billion, but the ISS wasn’t finished until 2011 for more than $100 billion.

What’s more, new stations “might be obsolete before they’re even launched,” says Chad Anderson, a venture capitalist whose firm, Space Capital, has funded companies including Nanoracks. He wonders if SpaceX, which has been silent about its plans, might swoop in with its giant, reusable multipurpose Starship—launching laboratories and space factories, carrying tourists, doing almost everything a permanent space station could at a cost other contenders cannot match. Starship has already been picked as NASA’s next moon lander.

“They’re going to pull this off,” says Anderson. “The unit cost is just the cost of fuel. What is that? $50 million—that’s the same price people are paying per seat to go to the International Space Station right now.”

The competitors for NASA’s support say they can meet the challenge. They’d go in the opposite direction from SpaceX; their approach is not to get too ambitious.

Conceptually, their designs borrow heavily from the ISS, with cylindrical modules and photovoltaic panels docked together. Most of these components already exist or are well along in development. Some sections are visibly larger and more bulbous because they’d be folded up for launch and inflated in orbit. That’s an excellent way to fit more cabin space in the payload fairing of a rocket—but even that idea is decades old. An inflatable storage compartment, called BEAM, has been docked to the ISS since 2016.

“There’s nothing that’s going to prevent the technology from being there for the hardware that flies,” says Doug Cooke, a former associate administrator at NASA who was heavily involved in planning the ISS. “We have the history and the experience.”

The race goes to the swift, and to the inexpensive. What will win out? The proven approach? Or the revolutionary? 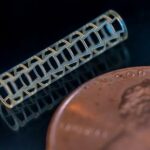 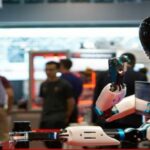