On Tuesday morning, Representative Sean Casten from Illinois stood on the House floor with a poster of the album art for Megan Thee Stallion’s “Hot Girl Summer” propped against a display easel beside him. The poster, which features a cartoonish illustration of Megan and collaborator Nicki Minaj riding a bottle of cognac like a horse, had been photoshopped to instead feature the logo for one of the government’s most nerdy, esoteric, and arguably un-hot agencies: the Federal Energy Regulatory Commission, or FERC.

“I rise today to recognize the start of hot FERC summer,” said Casten. “Why, you might ask? Well, to paraphrase Miss Stallion: Because now that FERC has put in all that work, it’s time for them to be the MVP.”

Casten is bringing back summer 2019’s most viral catchphrase to raise the profile of FERC and get young people more interested in what’s going on at the agency. “It is the single most important agency in terms of dealing with climate, and nobody pays any attention to it,” the congressman told Grist. (Prior to running for office, Casten occasionally wrote blog posts for Grist between 2007 and 2014.)

FERC regulates the interstate transmission of energy, via power lines and pipelines, as well as wholesale electricity markets — the sale of electricity from generators to utilities. The agency is essential to President Joe Biden’s goal of setting the country on a path to 100 percent clean electricity by 2035. Decisions made at FERC impact what kinds of power plants get built, where they get built, how favorable the market is toward emerging technologies like energy storage, whether new transmission lines are built and how they are funded, and which new gas pipelines get developed.

But there’s a high bar to entry to follow FERC’s decision-making processes, let alone participate in them. They have long, intricate histories, employ lots of acronyms, and require a knowledge of complicated market structures. Casten wants to demystify the agency for people over the next few weeks on social media with Twitter threads, a video, and a live Q&A.

But Casten also has political goals for hot FERC summer. He wants to press the Biden administration to quickly fill an open slot on the commission, and he has introduced two bills that would reform processes at FERC to boost the transition to cleaner energy.

FERC decisions are made by five commissioners, political appointees who serve five-year terms and have equal votes on the commission. Until recently, Republicans had a 3-2 majority at the agency, but Trump-appointed commissioner Neil Chatterjee’s term expired in June, leaving a vacancy.

The commission’s current chair, Democrat Richard Glick, has indicated he wants to take the agency in a new direction, for example, by taking greenhouse gas emissions into account when considering new natural gas pipelines — an approach that Republican commissioner James Danly is not on board with. Casten is concerned that now, with a 2-to-2 vote, the commission won’t be able to move forward on new rulemakings that help the country make progress on clean energy goals.

One of those key rulemakings is an overhaul of FERC’s transmission and interconnection planning process. A recent analysis by Lawrence Berkeley National Laboratory found that at the end of 2020, projects offering 680 gigawatts’ worth of carbon-free power — equal to more than half of the total installed electric generating capacity in the U.S. today — were waiting in “interconnection queues” to get access to the grid. These queues are stalled due to the need for power line upgrades and disagreements over who should pay for those upgrades, according to the advocacy group Americans for a Clean Energy Grid. Special high-voltage power lines that can carry renewable energy from the more rural areas where it’s generated to population centers are also needed, but those can take up to 10 years to build. Last week, FERC issued an advance notice that it may reform or revise its policies to help address these issues.

Casten, along with Senator Martin Heinrich of New Mexico, introduced a bill in April that orders FERC to initiate a rulemaking on interregional transmission planning. While the agency is now clearly planning to take the issue up, the bill provides a list of criteria any new rules must take into account and backs them up with the force of law. That bill has been included in various iterations of the infrastructure package currently working its way through Congress.

On Tuesday, Casten also re-introduced his Energy Price Act, which would require FERC to ensure that electricity rates incorporate the costs of climate change, a move that would make clean sources of energy more competitive.

Tyson Slocum, director of the energy program for Public Citizen, a nonprofit consumer advocacy organization, said Casten is one of the few members of Congress who is actively engaged in FERC issues. He applauded the congressman’s public relations effort for the agency, but said he had some concerns about presenting FERC first and foremost as an agency responsible for climate policy.

“I love what Representative Casten is doing,” said Slocum, “but I’d like to see it go bigger. I’d like to see us not just talk about climate change, but talk about energy justice. We’re seeing people getting disconnected from utility service at record amounts for non-payment, because people can’t afford their bills.”

Slocum said if Congress is going to tinker with FERC’s definition of “just and reasonable” electricity rates to incorporate greenhouse gas emissions, it should do a more comprehensive review that looks at energy affordability, too.

Casten said expensive fuels are a key driver of high energy costs, and that moving to renewables will make energy cheaper. But he acknowledged that we do need a way to finance the transition equitably.

Both Casten and Slocum said they were excited about the creation of a new Office of Public Participation at FERC, which could go a long way to make FERC more accessible by giving communities and small advocacy organizations the resources they need to get involved in FERC proceedings.

Wrapping up his speech on the House floor on Tuesday, Casten spoke about the deadly heat wave that recently hit the Pacific northwest, connecting it to our failure to eliminate emissions over the past 30 years and describing it as a sign of what’s to come if we don’t start cutting emissions now.

“As you of course know, Madam Speaker, hot girl summer ain’t about degrees,” Casten said wrapping up his speech on Tuesday, “but hot FERC summer most definitely is.”

This story was originally published by Grist with the headline The day ‘Hot Girl Summer’ came to Congress on Jul 21, 2021. 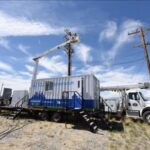