For the last four months, the Line 5 pipeline running under the Great Lakes has been carrying 23 million gallons of oil and gas each day, defying orders from Michigan’s Governor, Gretchen Whitmer, that the line be shut down. Protests have ensued. The Bay Mills Indian Community has banned the pipeline’s owner, Enbridge Energy, from its land. And Enbridge and Whitmer have been ordered into mediation by the court. The saga has grabbed national headlines, serving as the latest example of the fight over the future of fossil fuel infrastructure in the United States.

Now, new testimony from scientists has revealed the implications of future plans for Line 5, including the construction of a tunnel over part of the pipeline and the continued flow of oil through the system. According to the analysis, the tunnel project and pipeline could contribute an additional 27 million metric tons of greenhouse gases to the atmosphere annually, and generate $41 billion in climate damages between 2027 and 2070.

The testimony was provided by Peter Erickson, a senior scientist and climate policy director for the Stockholm Environment Institute, as well as by Peter Howard, an economic policy expert at New York University’s School of Law. The findings were submitted in a case before the Michigan Public Service Commission, which is deciding whether to grant Enbridge Energy a permit to encase a portion of Line 5 that runs through the Straits of Mackinac, an environmentally sensitive channel connecting Lake Michigan to Lake Huron. It’s the first time any Michigan agency has agreed to consider greenhouse gas emissions in its analysis under the Michigan Environmental Protection Act.

“By enabling the continued, long-term production and combustion of oil, construction of the project would work against, and therefore be inconsistent with, the goals of the global Paris Agreement and Michigan’s Healthy Climate Plan,” Erickson said in the testimony.

Michigan’s Healthy Climate Plan was created by Governor Gretchen Whitmer in 2020 to develop new clean energy jobs and put Michigan on track to achieving carbon neutrality by mid-century. The goals of the Paris Agreement are to limit warming to 1.5 degrees Celsius before catastrophic climate changes occur. To reach that goal, the Intergovernmental Panel on Climate Change has found that global oil production and use must decrease by 3 percent annually through 2050.

“Enbridge is likely to argue that there is no feasible alternative,” Margrethe Kearney, senior attorney at the Environmental Law & Policy Center, told Grist. But according to Elizabeth Stanton, founder of the Applied Economics Clinic, and other economic experts who testified in the permit case, Michigan’s energy needs can be met without the fossil fuels pumping through Line 5, mainly with electrification and renewable energy.

Enbridge is expected to submit its testimony to the Michigan Public Service Commission in December. A decision will be made in 2022.

In other Line 5 news this week, mediation between Governor Whitmer and Enbridge officially ended on Tuesday without a settlement. Whitmer ordered Enbridge Energy to shut down Line 5 by May, citing concerns of a possible spill from the 68-year-old  pipeline. But Enbridge refused, and today Line 5 continues to carry millions of gallons of oil each day.

The court-ordered mediation that began in April was a standard procedure to attempt to resolve the issue outside of court. The groups had an original expected end date of August but pushed it back to September. Now, with still no final settlement reached, the mediator plans to submit an additional report with recommendations, something that Michigan Attorney General Dana Nessel says violates the terms of their position as mediator. Nessel has filed a complaint asking the judge to prohibit or disregard any additional reports filed by the mediator.

Against the backdrop of the conflict in court, protests against Line 5 continue. Earlier this month, groups united internationally to demand that the Canadian government stop supporting Line 5. Canadian officials, including Prime Minister Justin Trudeau, citing economic concerns and energy security, have urged the court to stall the shutdown of the pipeline, which transports oil from western Canada to Michigan and on to eastern Canada.

“This is sort of the moment when the climate issue is really coming to a head in Michigan,” Kearney told Grist, referencing Whitmer’s commitments to reducing carbon emissions and recent flooding and other severe weather events in the state likely made worse by climate change. “We have an opportunity to say, ‘Let’s not build more fossil fuel infrastructure.’”

This story was originally published by Grist with the headline The climate costs of keeping Line 5 open would be very high on Sep 17, 2021. 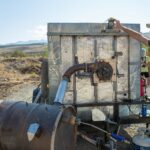