Even if you forget what “PFAS” stands for, it may be an environmental issue that’s close to your heart. That’s according to a new study that’s linked higher concentrations of the so-called “forever chemicals” to cardiovascular risks in middle-aged women.

Polyfluoroalkyl substances, or PFAS, are a group of chemicals that are used in many industrial activities and consumer products. Their properties made them popular additives in stain-resistant and non-stick inventions, despite the fact that they do not break down easily and can persist for hundreds of years under standard environmental conditions.

PFAS began sparking health concerns after scientists found they were bioaccumulating – building up in soils, drinking water, and even livestock. In fact, PFAS are now so widespread that nearly all Americans have detectable concentrations of at least one one PFAS compound in their blood.

Read Next
There are ‘forever chemicals’ in beef now
Diana Kruzman

Past studies have raised concerns that PFAS could impact cardiovascular health or even lower birth weights – a risk factor associated with higher rates of infant mortality. Now, a new study from researchers at the University of Michigan has found a stronger link between PFAS blood levels and high blood-pressure in a cohort of middle-aged women.

The long-term study looked at initial PFAS levels in a group of over a thousand women ranging in age from 42 to 52 years old, comprised of various ethnic backgrounds. After 18 years, nearly 45 percent of the women in the study developed high blood-pressure. Those who did tended to have much higher blood PFAS concentrations at the outset of the study. In fact, women with the highest levels of one particular PFAS compound – perfluorooctanoic acid, or PFOA – had an almost 50 percent higher chance of developing high blood-pressure than women with the lowest PFOA blood-level concentrations.

“We have known for some time that PFAS disrupt metabolism in the body, yet, we didn’t expect the strength of the association we found,” said Sung Kyun Park, one of the study’s senior authors. “We hope that these findings alert clinicians about the importance of PFAS and that they need to understand and recognize PFAS as an important potential risk factor for blood pressure control.”

High blood pressure, also known as hypertension, is the leading cause of death and disability in the world. When taken together, women in the study who were in the highest one-third of PFAS blood concentrations across all seven contaminants measured had a 71 percent higher chance of developing hypertension. (While it’s possible this association is also true of other groups, such as middle-age men or younger people, the researchers limited their findings to the demographics of the cohort.)

Radhika Fox, EPA Assistant Administrator for Water, said that this move is part of the agency’s “commitment to use the best available science to tackle PFAS pollution, protect public health, and provide critical information quickly and transparently.” These new drinking water standards rely on manufacturers to mitigate their waste streams. Park highlighted that this might require companies to change which compounds they use in their products.

“Our findings make it clear that strategies to limit the widespread use of PFAS in products need to be developed,” he said. “Switching to alternative options may help reduce the incidence of high blood pressure risk in midlife women.”

This story was originally published by Grist with the headline Study links ‘forever chemicals’ to high blood pressure in middle-aged women on Jun 16, 2022. 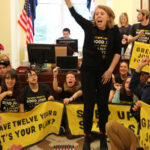 Where have all the climate activists gone?