A Falcon 9 rocket due to take off from Vandenberg Air Force Base in California next week will launch a unique cargo into orbit alongside the usual communications and observation satellites—the “soul” of Robert Henry Lawrence Jr., the first African American astronaut.

The launch manifest for the SSO-A SmallSat Express mission, organized by Seattle-based Spaceflight Industries, lists a spacecraft called Enoch, owned by LACMA—the Los Angeles County Museum of Art. And for months, that was all that was publicly known about the satellite.

Now, IEEE Spectrum has learned that Enoch contains a 24-karat-gold canopic jar with a bust of Lawrence. Canopic jars were used by ancient Egyptians to house the organs of the deceased for use in the afterlife. This jar was blessed at a Shinto shrine in Japan and “recognized as a container for Lawrence’s soul,” according to the museum.

“[Lawrence is] someone who has a mostly untold story, who I look at as a hero but who wasn’t necessarily considered one when I was a child in school,” says Tavares Strachan, the artist behind Enoch, in an interview with IEEE Spectrum. 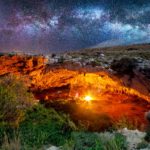