Physicists at Rice University have confirmed the topological origins of magnons, magnetic features they discovered three years ago in a 2D material that could prove useful for encoding information in the spins of electrons.

The discovery, reported in a paper in Physical Review X, provides a new understanding of topology-driven spin excitations in materials known as 2D van der Waals magnets. These materials are of growing interest for spintronics, a novel technology that uses electron spins to encode information for computation, storage and communications. Spin is an intrinsic feature of quantum objects and the spins of electrons play a key role in bringing about magnetism.

According to Rice physicist Pengcheng Dai, co-corresponding author of the paper, inelastic neutron-scattering experiments on the 2D material chromium triiodine confirmed the origin of the topological nature of spin excitations termed magnons, which his group and others discovered in the 2D material in 2018.

In van der Waals materials, atomically thin 2D layers are stacked like pages in a book. The atoms within layers are tightly bonded, but the bonds between layers are weak. These materials are useful for exploring unusual electronic and magnetic behaviors. For example, a single 2D sheet of chromium triiodine has the same magnetic order that sticks magnetic decals to a metal refrigerator. Stacks of three or more 2D layers also have that magnetic order, which physicists call ferromagnetic. But two stacked sheets of chromium triiodine have an opposite order called antiferromagnetic.

That strange behavior led Dai and his colleagues to study the material. Rice graduate student Lebing Chen, lead author of the paper, developed methods for making and aligning sheets of chromium triiodide for the experiments at ORNL. By bombarding these samples with neutrons and measuring the resulting spin excitations with neutron time-of-flight spectrometry, Chen, Dai and their colleagues were able to discern unknown features and behaviors of the material.

In their previous study, the researchers showed that chromium triiodine makes its own magnetic field thanks to magnons that move so fast they feel as if they are moving without resistance. In this latest study, they discovered why a stack of two sheets of 2D chromium triiodide has antiferromagnetic order.

“We found evidence of a stacking-dependent magnetic order in the material,” Dai said. Discovering the origins and key features of this state is important because it could also exist in other 2D van der Waals magnets.

This story is adapted from material from Rice University, with editorial changes made by Materials Today. The views expressed in this article do not necessarily represent those of Elsevier. Link to original source. 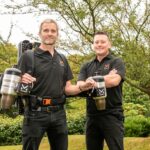 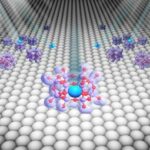