Red alert: Portions of the Arctic are warming much faster than we thought

Scientists revealed new measurements this week that show parts of the Arctic are warming five to seven times faster than the rest of the world, warming that could bring about even more extreme weather in the Northern Hemisphere.

The data comes from a portion of the Arctic Ocean north of Norway and Russia. Scientists with the Norwegian Meteorological Institute compiled surface air temperatures from islands in the northern Barents Sea from 1981 to 2020. In findings published Wednesday in the journal Scientific Reports, they wrote that annual average temperatures there are rising by up to 2.7 degrees Celsius per decade, making it the fastest warming region known on Earth.

“We expected to see strong warming, but not on the scale we found,” Ketil Isaksen, the climate researcher who led the work, told the Guardian. “This is an early warning for what’s happening in the rest of the Arctic.”

The study also found that the connection between the amount of sea ice in the region and rising temperatures is even stronger than researchers initially thought. White sea ice reflects sunlight, but when it melts, dark blue water absorbs heat from the sun, creating a cycle of more melting and more warming. This feedback loop is well-known, and is one of the key reasons temperatures in the Arctic are rising faster than the global average. “But what’s happening in the far north is off the scale,” Isaksen told the Guardian.

Extraordinary changes in the Arctic don’t just affect the far north. Earth’s climate patterns are dictated by small differences in temperature and density, which drive everything from globe-spanning atmospheric circulation patterns to ocean currents. Crank up the heat in the Arctic, and the effects reverberate elsewhere, too.

Though it’s still an evolving area of research, some scientists contend that rapid warming in the Arctic is slowing the jet stream — the current of air that moves weather patterns across the Northern Hemisphere — contributing to extreme events, like droughts, heat waves, and deluges of rain. Studies have found links between melting Arctic sea ice and intensifying wildfires in the western U.S., blizzards across Europe, and extreme rainfall during India’s monsoon season.

This story was originally published by Grist with the headline Red alert: Portions of the Arctic are warming much faster than we thought on Jun 17, 2022. 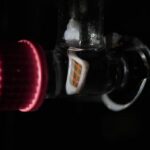 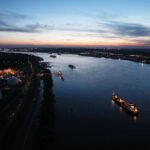