Polariton throttle could speed up development of cool electronics

The way that we were changing the speed of the motion of these particles is still basically unprecedented in the literature.Andrew Musser, Cornell University

Polaritons offer the best of two very different worlds. These hybrid particles combine light and molecules of organic material, making them ideal vessels for energy transfer in organic semiconductors.  They are compatible with modern electronics and also move speedily, thanks to their photonic origins. But they are difficult to control, and much of their behavior is a mystery.

A team of researchers led by Andrew Musser, assistant professor of chemistry and chemical biology in the College of Arts and Sciences at Cornell University, has now found a way to tune the speed of this energy flow. This ‘throttle’ can move polaritons from a near standstill to something approaching the speed of light and increase their range – an approach that could eventually lead to more efficient solar cells, sensors and LEDs. The team reports its work in a paper in Advanced Science.

Over the past several years, Musser and colleagues at the University of Sheffield in the UK have explored a method for creating polaritons via tiny sandwich structures of mirrors, called microcavities. These microcavities trap light and force it to interact with excitons – mobile bundles of energy that consist of a bound electron-hole pair – to create polaritons. The researchers previously showed how microcavities can rescue organic semiconductors from ‘dark states’ in which they don’t emit light, with implications for improved organic LEDs.

For this new project, the team used a series of laser pulses, which functioned like an ultrafast video camera, to measure in real time how the energy moved within the microcavity structures. But the team hit a speedbump of its own. Polaritons are so complex that even interpreting such measurements can be an arduous process.

“What we found was completely unexpected. We sat on the data for a good two years thinking about what it all meant,” said Musser, the paper’s senior author.

Eventually, the researchers realized that by incorporating more mirrors and increasing the reflectivity in the microcavity resonator, they were able to, in effect, turbocharge the polaritons.

“The way that we were changing the speed of the motion of these particles is still basically unprecedented in the literature,” Musser explained. “But now, not only have we confirmed that putting materials into these structures can make states move much faster and much further, but we have a lever to actually control how fast they go. This gives us a very clear roadmap now for how to try to improve them.”

In typical organic materials, elementary excitations move on the order of 10nm per nanosecond. According to Musser, this is roughly equivalent to the speed of world-champion sprinter Usain Bolt. That may be fast for humans, he noted, but it is actually quite a slow process on the nanoscale.

The microcavity approach, by contrast, launches polaritons 100,000 times faster – a velocity on the order of 1% of the speed of light. While the transport is short lived – instead of lasting less than a nanosecond, it’s less than picosecond, or about 1000 times briefer – the polaritons move 50 times further.

“The absolute speed isn’t necessarily important,” Musser said. “What is more useful is the distance. So if they can travel hundreds of nanometers, when you miniaturize the device – say, with terminals that are tens of nanometers apart – that means that they will go from A to B with zero losses. And that’s really what it’s about.”

This brings physicists, chemists and material scientists ever closer to their goal of creating new, efficient device structures and next-generation electronics that aren’t stymied by overheating.

“A lot of technologies that use excitons rather than electrons only operate at cryogenic temperatures,” Musser said. “But with organic semiconductors, you can start to achieve a lot of interesting, exciting functionality at room temperature. So these same phenomena can feed into new kinds of lasers, quantum simulators or computers even. There are a lot of applications for these polariton particles if we can understand them better.”

This story is adapted from material from Cornell University, with editorial changes made by Materials Today. The views expressed in this article do not necessarily represent those of Elsevier. Link to original source. 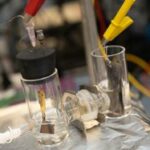