From turning the steering wheel to pressing down the accelerator pedal, the driving experience is very tactile. Haptic technologies simulate the sense of touch by triggering forces, vibrations or motions to the drivers, and are increasingly used by the automotive industry as a way to confer a safer, more informed and more intuitive user experience.

“When you try to generate high voltage in consumer or in car applications, if you don’t have good electronics, you will basically burn all your energy to increase that voltage, and that will make the overall system inefficient even though the actuator itself is efficient,” Simon Chaput, Boréas’ founder and CEO, told EE Times. “We solved that problem, and created a driver that takes the low voltage and generates the required high voltage.” The BOS1211 has been designed to support TDK’s family of 120V PowerHap piezoelectric actuators.

More than 52.8 million automotive touch panels will be on the market by 2020, according to IHS Markit Center Stack Display Production Forecast, and that number is increasing by 4.6 percent annually. Safety is one of the key drivers for adoption.

In a car, said Chaput, touchscreens are more efficient than the voice control to do quick tasks. The main issue with touchscreens, however, “is the time to look at it is too long because we wait for confirmation”. Haptics enables the user to touch the screen like a traditional button interface, which means “you can slide your finger across the screen, feel different textures until you reach the button, then press on the button area and feel the mechanical click that tells you that the button has been pressed, the command has been registered and whatever action you have ordered will take place in the next few seconds.” The whole idea is to keep the driver’s eyes on the road and hands on the wheel as much as possible.

Within the automotive cabin, haptic technologies can be used to trigger different warnings to the driver without adding stress to the visual and auditory loads. Touchscreen is one application, steering wheel is another, said Chaput. “You can think of the control buttons on the steering wheels, but also if you drive off your lane, the wheel will vibrate and tell you that you need to recover control of your car.” Speeding warnings can also be triggered in the pedal to alert the driver that he or she is exceeding the speed limit. Same thing with the seat and belt where actuators could be used to help improve the driver’s awareness of his or her surroundings.

At last year’s CES, Boréas demonstrated a buttonless smartphone, replacing the mechanical volume and power buttons with two piezo actuators next to the frame. While customers tend to prefer buttonless smartphones and tablets, expectations may be different within the car cabin. “I think a common misconception is that haptic feedback will replace buttons and knobs inside the vehicle,” commented IHS Kyle Davis. According to IHS Markit User Experience Consumer Survey, “most new vehicle buyers are looking for a mix between a touchscreen and buttons, not one or the other.”

In May 2019, Boréas and TDK announced their collaboration to accelerate the adoption of piezo haptic solutions in applications such as automotive displays and controls, wearables, smartphones and tablets. At the time, Boréas’ first product, the BOS1901 power-efficient piezo driver IC, was seen as a good fit for TDK’s PowerHap actuators with an operating voltage of up to 60V. Partners also planned to develop the first low-power piezo driver IC for the larger members of the PowerHap family with maximum drive voltages of 120V. That’s the BOS1211.

“We realized that together we had the best driver and the best actuator for haptics, but what our customers want is more a solution,” said Chaput. “We can move faster than if we were working on our own. In the long term, we can do roadmap alignment, meaning that we can make sure that the drivers we are designing and the piezo actuators TDK is developing are aligned together.”

Asked about the main differences between the BOS1091 and the BOS1211 ICs, Chaput said Boréas has improved the sensing interface to be more precise and autonomous. “On the BOS1901, the sensing is done by our chip but it requires some software while on the BOS1211 most of the sensing is handled by the chip itself,” which makes it more autonomous. Also, the BOS1901 was created for smart watches and phones, whereas the BOS1211 is made for large displays in cars. It meets the AEC-Q standard and is qualified for automotive applications.

Both the BOS1901 and BOS1211 ICs have been developed using Boréas’ patented CapDrive technology. Explaining what’s unique about it, Chaput first cited high force haptic feedback, thus the ability to move large screens and deform stiff materials. A second benefit is the fact that piezo actuators can be made in customizable form factors. “Typically, for LRA actuators, when you increase the size, it increases the dimension, and you end up with a big rectangular block.” Piezo actuators, he continued, “can be manufactured so that they fit well within the module, providing a better integration in the car.”

Boréas also claims the BOS1211 is the industry’s smallest haptic driver (4 x 4 mm QFN) for this level of haptic feedback strength and consumes “one tenth of the energy required by our competitors.” This low power solution, Chaput noted, enables car manufacturers to design haptics the way they want it to be without the risk of using too much power.

On the electronics side, Chaput said Boréas is at a point where “we have a good solution that makes it viable on the market.” The next step consists in “working with our customers, because most customers have expertise into actuating ERM and LRA, and the piezo actuator is quite different.” Of course, Boréas keeps a close eye on the competition to see what’s coming down the line and support the markets where, as a startup, there are the most promising outcomes. Texture-based haptics “is something we will look into in the future,” said Chaput. “We would need to find the right partner.”

Again, today’s priority “has to do with teaching our customers so that they can do the same kind of actuating they are doing with LRA today with piezo tomorrow.”

The BOS1211 is now sampling to key customers, “we now have multiple projects with multiple large OEMs”. To accelerate design to production with the TDK 120V PowerHap actuators, Boréas said it will offer a plug-and-play development kit for piezo haptic feedback in February 2020. Chaput said the company expects to launch production of the BOS1211 chip in 2021 and start volume production in the years 2022-2024.

Asked whose foundry is producing the BOS1901 and will produce the BOS1211, Chaput just said Boréas has “a very good partner.”

Chaput is confident haptics will likely touch most aspects of our lives, especially in the consumer and automotive spaces. “If you take one day, you use your hands quite often to provide good information on your surroundings.” But what happens when you shift to smartphones? “Most of that information has been digitized, and you can see it in full HD, 4K or even 8K.” You see, but not feel. “In the past twenty years, we have lost the touch feeling, because we are mostly interacting with glass that always feels the same. Haptics will bring back that touch information.”

Related content: Taking Touch Technology to the Next Level 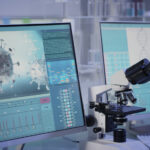