Joe Mosyjowski has watched a decade-long boom in oil and gas drilling unfold in the region surrounding his 50-acre farm in northeast Ohio. Mosyjowski, a 71-year-old retired engineer who once spent his days designing stormwater infrastructure, was surprised to learn that a byproduct of all that drilling was being spread on roads and streets near his property, which contains a football field-sized pond that he swims in every summer. Mosyjowski grew increasingly alarmed as he read that the product, a salty brine used to keep roads ice-free, can be radioactive.

“I don’t want this stuff spread anywhere near the roadways,” Mosyjowski told Grist in a phone call from his home in Portage County, a rural area about an hour south of Cleveland. “I don’t want it near my water, because the water runs into my pond. I just want to keep things clean.”

At least 13 states — including Ohio, Indiana, Illinois, and Michigan — allow oil and gas wastewater to be put to “beneficial use,” a category that includes road de-icing, dust suppression, and maintenance. This is an advantageous arrangement for oil and gas companies, because it’s cheaper to give brine to local governments for free rather than paying to dispose of waste in a landfill. Cash-strapped towns and counties, meanwhile, are reluctant to look a gift horse in the mouth — to the detriment of their residents’ health, according to Cheryl Johncox, an organizer with the Sierra Club and member of the Ohio Brine Task Force, a coalition of activists, scientists, and concerned residents.

“This is a way for the industry to push off their problems onto regular people and not be held accountable,” Johncox told Grist.

As awareness of the widespread practice of brine spreading grows, organizers like Johncox and concerned residents like Mosyjowski have joined forces to try to limit or ban the practice. Community activists have pushed for local laws to prevent oil and gas waste from being spread on roads as part of a larger movement against drilling in the state. When initiatives that would have allowed more local control of oil and gas extraction were not even allowed onto the ballot in several counties, a coalition of local groups sued the state. A bill that would prohibit the application of radioactive brine to public roadways was introduced in the legislature in March, though it faces an uphill battle with a Republican majority that’s friendly toward fossil fuels, Johncox said.

The process of drilling oil and gas wells requires lots of water, which is pumped in to assist heavy machinery cutting through rock. But when that water comes back up, it brings with it naturally-occurring radioactive elements — including radium and uranium — found in the earth’s crust, along with salt and toxic substances like lead and arsenic. The result is called “Technologically Enhanced Naturally Occurring Radioactive Material,” or TENORM, and it’s typically contained in a salty mixture that the industry calls brine.

A 2020 investigation by Rolling Stone found that oil and gas companies use multiple methods to get rid of this waste without having to pay to send it to a landfill, despite concerns about its radioactivity. Aside from spreading it on roads, wastewater can be mixed with soil and applied directly to the ground in a process known as “land farming.” In Pennsylvania, drill cuttings containing radioactive particles can be “dusted” — forcefully blown onto the ground — and in California, oil and gas wastewater is used for irrigating crops.

Despite the risks of radioactivity, there are legitimate health and environmental benefits to the use of brine on many roads. Spraying the substance onto unpaved roads in the summer helps tamp down dust, a major source of airborne particulate matter that poses a risk to cardiovascular and respiratory health. Its high salinity helps prevent snow and ice from sticking in the winter, making it an alternative to highly-polluting road salt.

But once these substances enter the environment, they don’t go away. When the roads dry, dust containing lead and radium blows into the air people breathe, while excess brine leaches into the soil and runs off into nearby waterways. Radium is of particular concern because it is “bone-seeking,” meaning it collects in bone cells; long-term radium exposure can increase the risk of developing bone or lung cancer.

For this reason, according to Johncox, the brine “has no place being spread in our environment, on our roadways, near homes.”

Testing conducted by the Ohio Department of Natural Resources found that average levels of two radioactive isotopes, radium-226 and radium-228, in one brand of commercially available brine, called AquaSalina, were more than 300 times higher than federal standards for drinking water. The levels were also 14 times higher than the state’s limit for how much radium can be released into the environment.

The company that makes AquaSalina, Nature’s Own Source, uses wastewater from oil and gas drilling conducted by Duck Creek Energy, which operates more than 150 wells in northeastern Ohio. The owner of both companies, David Mansbery, has dismissed claims about the brine’s toxicity in testimony before the Ohio legislature and interviews with local news outlets. He’s pointed to a 2019 report from the Ohio Department of Health that found the environmental health risks from AquaSalina were “negligible.” Nature’s Own Source markets AquaSalina as “ancient seawater” and proclaims on its label that it’s “Safe for Environment & Pets.”

Mansbery and company representatives from Nature’s Own Source did not respond to Grist’s requests for comment in time for publication.

No federal regulations exist to manage TENORM disposal. In the 1980s, the Environmental Protection Agency excluded oil and gas waste from being classified as “hazardous” under the Resource Conservation and Recovery Act, which would have required companies to dispose of wastewater in special landfills equipped to handle radioactive material. Oil and gas waste is also exempt from federal “solid waste” regulations, leaving disposal requirements up to individual states.

A lack of regulation means data on brine spreading is scarce, according to a 2021 report from the Natural Resources Defense Council, or NRDC. One study found that between 2008 and 2016, just two states, Ohio and Pennsylvania, spread a combined total of 95 million gallons of oil and gas wastewater onto roads. “Unfortunately, without adequate regulations, there is scant industry monitoring data or information about violations, so the full scope of health impacts facing nearby residents or workers from TENORM exposure remains unclear,” the NRDC report concluded.*

According to data collected by the nonprofit Buckeye Environmental Network through public records requests, local governments have spread nearly 42 million gallons of brine on roads in Ohio since 2005. Teresa Mills, the organization’s executive director, said that’s likely an underestimate, as there is no centralized database to track brine spreading, and many towns and counties didn’t provide any information at all. The group’s count also does not include individuals who spread brine on private roads or driveways.

Research on the effects of radioactivity from oil and gas waste has also been limited. In 2018, researchers from Pennsylvania State University and the University of Alberta found that 45 percent of the radium contained in brine leaches into the soil after it’s applied to roads. Although their study noted that rainwater could dilute radium concentrations in nearby bodies of water to levels considered safe by environmental regulators, “further work is needed to investigate if the radium will migrate to groundwater” or accumulate in sediments over time.

Brine spreading is just one of the byproducts of oil and gas drilling that concern activists. Trucks containing brine have crashed and spilled thousands of gallons of radioactive material into waterways, while processing oil and gas waste through conventional wastewater treatment plants caused spikes in radioactivity in Pennsylvania rivers. In April, scientists found high levels of radioactivity outside one facility used to store and process oilfield waste in southeastern Ohio — a facility located close to a high school and municipal drinking water wells.

Efforts to limit the practice have achieved mixed results. Pennsylvania banned oil and gas brine spreading following a lawsuit in 2018, but New York’s governor vetoed legislation that would have done the same late last year. The Ohio Department of Transportation agreed to stop purchasing new stocks of AquaSalina last year, while the Ohio Brine Task Force successfully pressured the superstore Lowe’s into pulling the product from its shelves, though it’s still available at other hardware stores. At the same time, bills that would deregulate brine spreading — exempting products such as AquaSalina from tracking requirements and limits on where they can be applied — have been introduced in Ohio’s legislature.

The Ohio Brine Task Force plans to continue pressuring lawmakers to reject those bills throughout the summer and into the fall legislative session, Johncox said. But even if those fail, Mosyjowski said more work will have to be done to end the practice entirely. He has been pressuring his town to ban brine spreading, and he thinks similar local laws will be needed around the state.

“This is just one one battle in a very long skirmish to leave something for future generations,” Mosyjowski said. “I wish we had a value system that respected water and the land far more than we do now.”

*Editor’s note: The Natural Resources Defense Council is an advertiser with Grist. Advertisers have no role in Grist’s editorial decisions.

This story was originally published by Grist with the headline Ohio residents fight to get radioactive oil and gas waste off their roads on May 13, 2022. 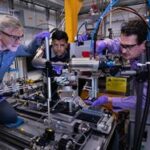