This is a guest post. The views expressed here are solely those of the author and do not represent positions of IEEE Spectrum or the IEEE.

Any hopes that the space agencies in Houston and Moscow had for tamping down public concerns over the International Space Station’s recent tumble in orbit were lost last week as new revelations from Moscow confirmed worst-case rumors.

The ISS’s tumble was caused by the inadvertent firing of maneuvering thrusters on the newly arrived Nauka Russian research module (referred to as the MLM module by NASA). But it’s become clear that the module had been lurching from crisis to crisis during its weeks-long flight before it rendezvoused and docked at the space station. This is raising concerns about exactly how much NASA knew and when, given the stringent safety requirements normally in place that any visiting vehicle must meet before being allowed to approach the station.

This and other questions have been raised as the last two weeks have seen a remarkable and surprising degree of Russian openness, especially as compared to NASA’s. Some of that transparency has also surfaced an interesting coincidence (at minimum) involving a spaceflight-themed movie potentially being filmed aboard Nauka that at least complicates but also perhaps begins to explain some of the curious components of this near-disaster’s chronology.

First, Alexander Khokhlov, a Russian space expert and member of the private Russian Federation of Cosmonautics, had told the RIA Novosti news agency that several emergency situations had occurred on the Nauka during the flight to the ISS, but that Russian specialists managed to cope with “most” of them.

According to him, systems that had significant problems included the infrared sensors which determine the local horizon, the radar antenna that feeds into the automated Kurs rendezvous system, and the Kurs system itself. He also had described a “severe emergency” with the propulsion system. A number of these failures were subsequently confirmed by the European Space Agency while NASA remained silent.

Then on August 7, Dmitry Rogozin, General Director of Roscosmos, spoke with RIA Novosti about the problems of building the Nauka space module. And on the YouTube channel “Soloviev LIVE” (typically noted for its hosts hewing to the official government line), Rogozin singled out the shutting down of a Ukrainian aerospace factory as creating “predictable difficulties in the flight” of Nauka. In Soviet days, this factory used to make an accordion-like bellows used in the propellant tanks to separate the pressurizing gas from the liquid fuel as it was pushed into the engines. In Rogozin’s words, “We understood that we would have to spend, in fact, all eight days in manual control of both the flight of this module and the docking. And indeed we had problems there” While the exact details are unclear, it looks like the Russians were worried that accidental leaks across the propellant/pressurant barrier would frustrate automatic real-time management of propellant flow into the module’s rocket engines, and instead required direct valve commanding from ground stations.

When asked about such reports last week, a NASA spokesman in Houston had simply said that “Roscosmos regularly updated NASA and the rest of the international partners on MLM’s progress during the approach to station” but gave no details and referred all inquiries about Russian hardware issues to Moscow. “We would point you to Roscosmos for any specifics on MLM systems/performance/procedures.” 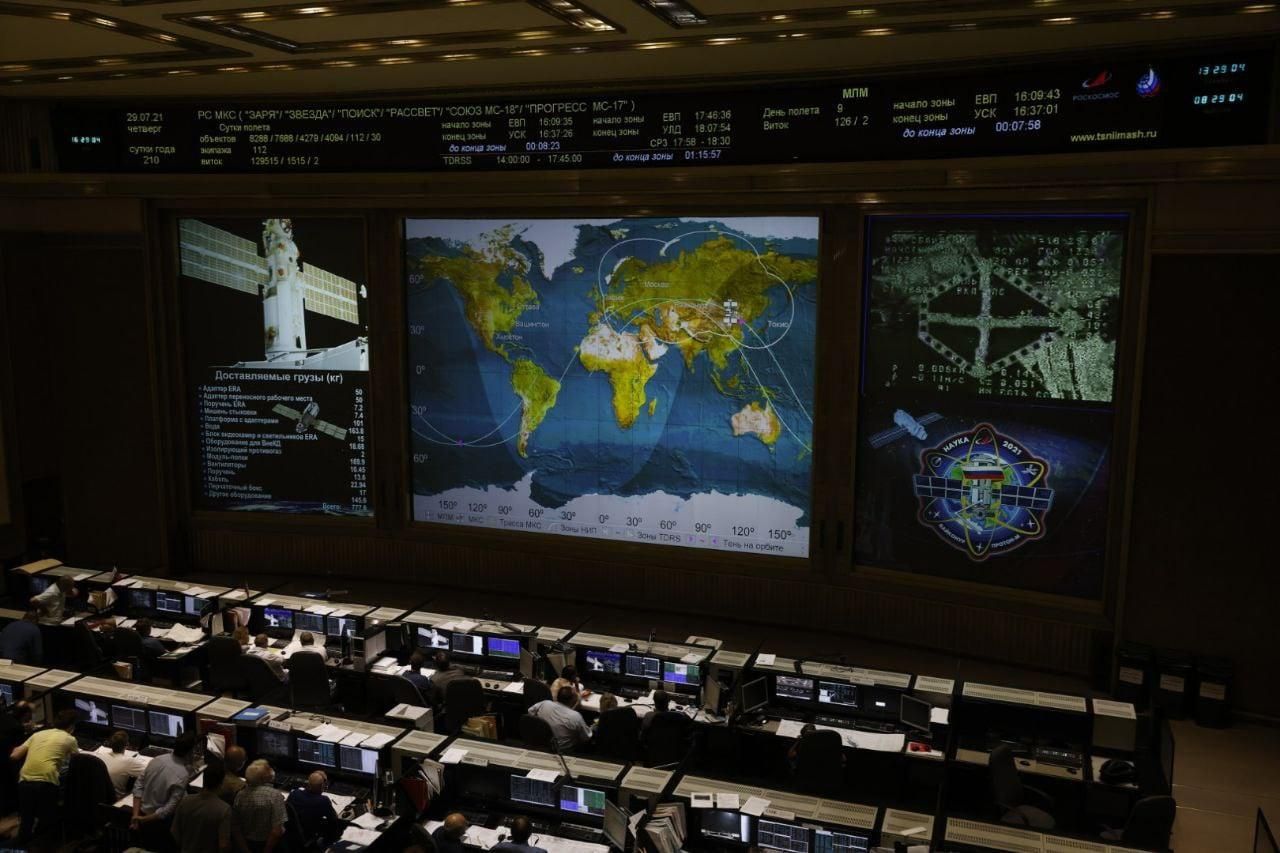 On August 13, RIA Novosti reported that 61-year-old Deputy General Designer of the Energia Rocket and Space Corporation Alexander Kuznetsov, the senior Russian space official in direct charge of the Nauka module, had been hospitalized with a stroke immediately after the docking. He was, however, soon released—although a few days later was hospitalized again. The agency attributed the stroke to “the colossal tension” and that “Kuznetsov, along with other specialists and members of the state commission, spent all eight days of the module’s flight at the Mission Control Center, practically without leaving the premises.”

On August 14, RIA Novosti confirmed that “mass failures of the systems of the Nauka module… arose after it was put into low-earth orbit and threatened a serious emergency.” But the story was upbeat: According to a “source in the rocket and space industry,” these problems “were eliminated thanks to the continuous work of ground specialists for eight days, the revision of the module’s flight task and the creation of an emergency working group of the best experts in the industry.”

The story’s chronology of challenges was daunting: “The main problems of the first two days of the flight of the Nauka module were: the failure of the flight program and the operation of one of the fuel valves, the problem of transmitting the command package on board from the ground measuring complexes, the absence of a signal from two sensors of the infrared vertical [sensor] and from one of the two star sensors.” The story described how Mission Control Center director Vladimir Solovyov immediately reported on the critical situation to the general director of the Roskosmos state corporation, Dmitry Rogozin, who took direct control of the module’s flight.

Communication between the Moscow Mission Control Center—”TsUP” in Russian—was too uncertain, so “engineers of the Russian Space Systems holding were promptly dispatched to all ground measuring points, who coped with the task of stable transmission of commands to the module and receiving telemetric information from it.”

On July 23, a working group was created by Rogozin to save the troubled module. The group was headed by Sergey Kuznetsov, General Designer of the Salyut Design Bureau and included representatives of the Keldysh Center, the developers of Nauka.

Starting from July 25, the main and backup sets of the Kurs rendezvous and docking system were successfully tested, the fuel reserves required for the rendezvous were recalculated, a new docking scheme was calculated taking into account the strength of the station and the module (the maximum docking speed was limited to 8 centimeters per second), and the stable operation of both star sensors, responsible for the exact orientation of the Nauka, was restored.

These ad-hoc fixes raise the issue of how much did those rushed and admittedly often poorly coordinated ground station commanding and flight software reprogramming initiatives themselves contribute to the potential for onboard “software glitches” such as the still-undefined one now blamed for the renegade thruster firing that tumbled the station? And what is the actual current status and residual content level of the propellant tanks aboard Nauka, given the official descriptions of major monitoring function loss during the rendezvous maneuvers? 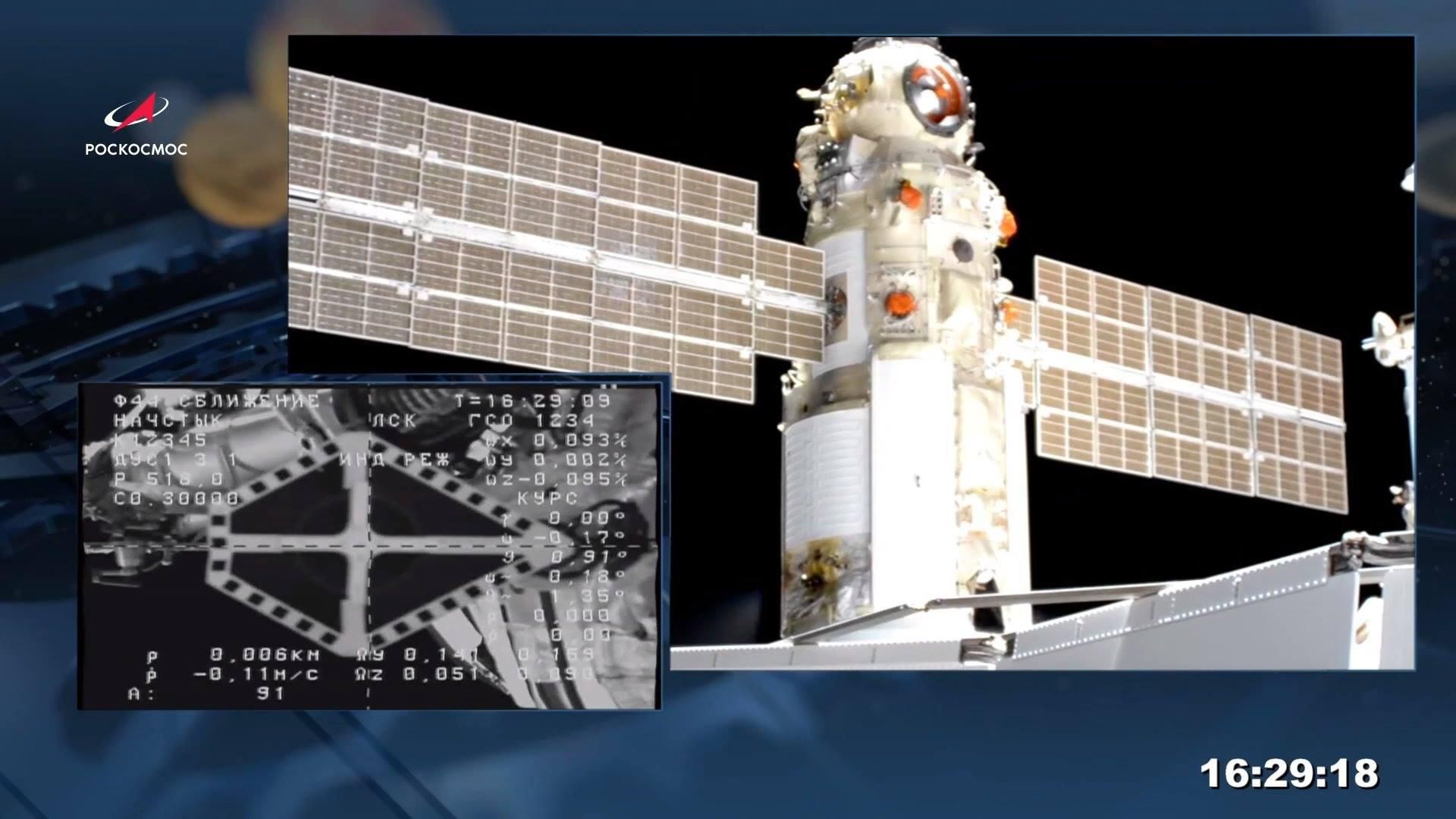 In any case, the parade of details of the problems overcome during the pre-docking phase of the mission stands in stark contrast to the Russian press treatment of the post-docking thruster firing incident. On August 4 there had been one interview with former cosmonaut Sergei Krikalev, executive director for manned programs of Roscosmos. on Russia 24 TV channel:

“The module, apparently, itself could not believe that it had already docked, so when the control system of the module was [reinitialized], the control system decided that it was still in free flight—and, not understanding what was happening, for safety, an algorithm was triggered, turning on the motors … This, of course, should not have happened. The commission is now examining the reasons for this…. The station is a rather delicate device … Everything was done as lightly as possible. And the additional load causes a load on the [motor] drives of solar batteries, on the [frames] on which everything is installed…. This is an emergency situation that will need to be analyzed in detail… There are probably no damages … Nothing broke off from the station, I can reassure you, but the extent to which we have loaded the station, what are the consequences, it will now be assessed by experts.”

But, aside from these candid comments from Krikalev, the thruster firing became a non-event, except in brief press references to a short interlude in which the “station temporarily lost its orientation.” That wording, more suggestive of an addled old man who felt dizzy than of an enormous structure doing a full tumble and a half with counter-thrusting rocket engines shoving at it in totally unexpected directions, recalled the laconic NASA press release after the near-catastrophic Mir fire in 1997: “Small Fire Put Out on Mir.”

NASA’s narrative-control lid in 1997 was so tight that Jerry Linenger—who’d been aboard Mir in 1997 and considered the incident a very narrow brush with death—later recalled how he was forced to send accurate accounts of that emergency to his wife via a data stick carried by a returning German visiting cosmonaut, since he knew all official messages (including family emails) were being monitored.

Perhaps an echo of that NASA policy is detectable today: Since the Nauka docking, nobody on the US side—three US crew members, a French astronaut, and the Japanese station commander—has been seen to tweet any mention of the dramatic tumble and recovery on docking day. Their public message traffic looks as if the incident never happened.

As the month of August passes, parallel review boards in the United States and Russia are at work behind closed doors. On August 9, NASA ISS program manager Joel Montalbano told journalist Jeff Foust on a Facebook discussion thread that it’s a “little too early” to set a timeline for the investigation. NASA is in “regular communications” with Russian colleagues on this, he said. Montalbano also told US specialist on the Russian space program Marcia Smith that they “may have more to say in 2-3 weeks.”

If the dramatic launch and trouble-plagued rendezvous of Nauka looks slapdash premature—a bizarre notion for a feat that was originally planned for fifteen years ago—there is one intriguingly suggestive schedule-driver that is only weeks in the future.

A routine launch of the next long-term Russian crew had long been slated for early October. Called “Soyuz MS-19,” it was to carry three professional Russian cosmonauts who had been training for at least a year. But several months ago there was a redirection of the mission and the crew.

Two of the three cosmonauts were bumped from the mission and replaced by a movie actor and a director/cameraman, as part of a commercial project to make a spaceflight-themed movie in space.

The project reportedly has high level backing by powerful figures in Moscow, including in the Kremlin, as well as overseas investors.

Even more significant than political favoritism, however, is the simple question of cash. Since the mid-1990s, the influx of foreign funding for the Russian space industry has been a cash cow for space program officials and their political protectors.

Aside from rented official approvals, this first-of-its-kind movie project has been developed and the scene lists tailored specifically to the Nauka module. Nauka contains the living quarters for the extra visitors, the laboratory unit to simulate an in-space operating room (the movie’s main theme), and high-quality viewports for spectacular imagery of Earth below.

The potential relevance for any putative urgency to launch Nauka, ready or not, is that it had to occur at least several weeks before this MS-19 mission, or the wrong people would have been aboard the Soyuz, and long-term crew activity planning was not subject to revision. The choice might have been go now, or wait another year for the cash commissions the movie project would have generated. Or the timing could just be a coincidence, just one more unanswered question in an orbital drama of mystery and misdirection. 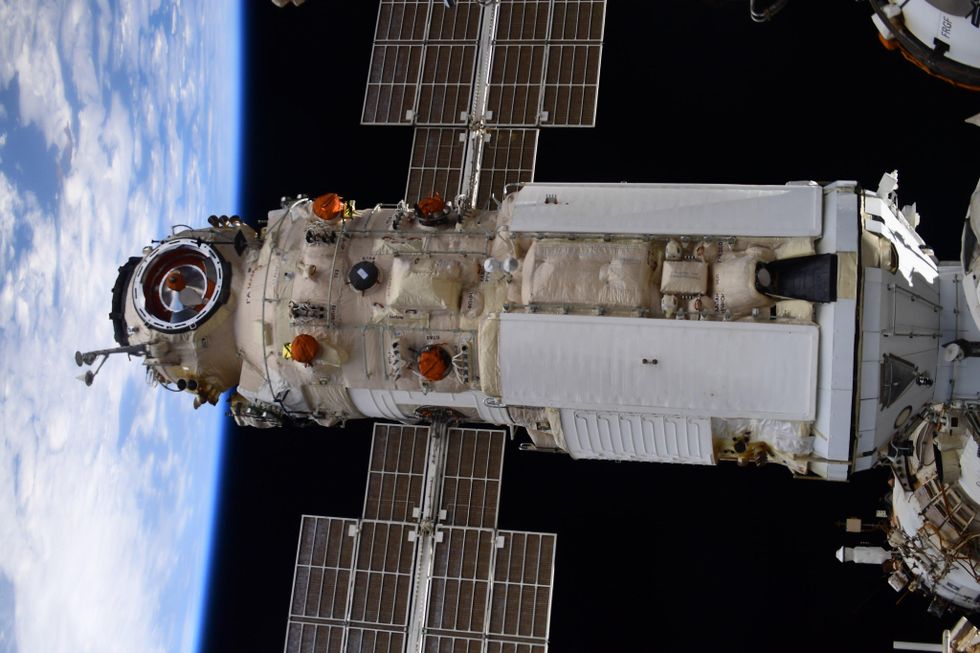 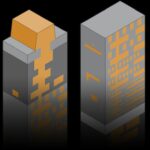 Next-Gen Chips Will Be Powered From Below