Transition metal-nitrogen-carbon (M-N-C) catalysts could be useful for polymer electrolyte fuel cells (PEFCs), which cleanly convert hydrogen to electricity, as an alternative to platinum and other precious metal catalysts. While these catalysts can be readily synthesized using high temperature treatment (or pyrolysis) in an inert atmosphere, the mechanism of the process is not well understood at all. Pyrolysis is something of a ‘black box’ process with precursors going in one side and catalysts emerging on the other. Now researchers have revealed the secrets of M-N-C catalyst pyrolysis using a range of in situ and ex situ techniques [Huang et al., Materials Today (2021), https://doi.org/10.1016/j.mattod.2021.02.006 ].

“The process of heating material to high temperature has been used for years, but not understood,” says Iryna V. Zenyuk of the University of California Irvine, who let the work with Plamen Atanassov. “This [involves] a ‘blind’ or empirical trial-and-error optimization approach to make the electrocatalysts better.”

Together with colleagues from Argonne and Lawrence Berkeley National Laboratories, and Technische Universitat Berlin in Germany, Zenyuk and Atanassov used high brightness X-rays to probe what happens to M-N-C catalysts when heated from room temperature to 1000°C. Using a range of techniques, the researchers followed the chemical and morphological transformation of a nitrogen-containing organic salt, transition metal salt, and silica powder during pyrolysis.

“We tried to understand what is the most important temperature regime for catalyst synthesis by pyrolysis,” says Zenyuk. “We wanted to know when chemical transformation starts and whether the morphology change precedes the chemical one or results from it.”

The researchers found three distinct stages of the process. Initially, up to 400°C, the organic nitrogen-containing precursor, nicarbazin, begins melting and filling the voids in the precursor. As the temperature increases from 400°C to 900°C, domains of amorphous carbon form, creating a carbon ‘backbone’, and metallic iron clusters start appearing. Finally, above 900°C, the carbon is graphitized and metal nanoparticles agglomerate.

“No one [has] attempted to observe simultaneously morphology evolution, chemical and structural evolution of the catalyst before,” points out Zenyuk. “This is the first study to document and explain what happens to the catalyst material at each stage of heating.”

Using these observations and the information gathered, the researchers believe that it will be possible to design more active M-N-C catalysts with greater control.

“The knowledge at which temperature what transformation takes place would give us the ability to design catalysts more rationally, predictably and to achieve better and better results, to take us closer and closer to the ‘platinum goal’ of superior performance,” she says. 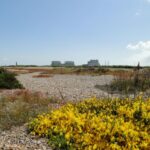