Global motion control and motor suppliers have received orders at $2.65 billion through the third quarter of 2019, an increase of 1.9% compared to the same period in 2018, according to the Motion Control & Motor Association (MCMA), part of the Association for Advancing Automation (A3). Shipments also showed growth, at $2.92 billion up 1.5% over the first nine months of 2018.

According to the latest MCMA survey of industry experts, 54% of respondents believe orders will increase in the next six months, while 33% expect flat performance.

“It’s encouraging to see growth as we near the end of the year and to report the positive projections from industry companies,” said Jeff Burnstein, president of the Association for Advancing Automation.

– Edited from an A3 press release by CFE Media. A3 is a CFE Media content partner. 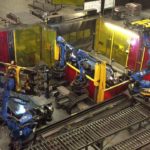