At the end of 2020, mobile robots were deployed in just over 9,000 separate customer sites. By 2025, deployments will have increased to over 53,000 sites. Whilst this may seem a lot, it is not even close to reaching the ceiling of market saturation – market penetration of mobile robots will still not have exceeded 30%. Furthermore, those penetration levels do not account for where facilities have multiple types of robots installed, nor the mass rollout of fleets in a single warehouse. Given that, the opportunity for autonomous guided vehicles (AGVs) and autonomous mobile robots (AMRs) is even larger.

The warehousing sector in particular is poised to become a huge market for mobile robot vendors. And our research shows that 2020 marked a watershed for the industry. Growth resumed midway through the year, after a difficult first half amidst the height of the COVID-19 pandemic. Despite CapEx restrictions and facility shutdowns overall mobile robot shipments increased by more than 25% in 2020, and with nearly 60,000 AGVs and AMRs being deployed.

And there is plenty of scope for further growth. Up until now, warehousing has been highly dependent on human labor, and we are going to see 30,000 new warehouses being built over the next five years. But warehousing isn’t the only sector where we expect to see major penetration by mobile robots. Manufacturing, notably automotive, will also invest heavily in mobile robotic solutions in the next few years. We all witnessed the automotive sector experience a catastrophic downturn during the pandemic, and recovery has been slow, with a resultant fall in investment in automated solutions. But the industry is at a turning point as manufacturers phase out ICE vehicle production and reconfigure assembly lines for the era of the electric vehicle. Automated solutions, including mobile robots, will play a significant part in this remodeling. One example is Arrival, who have developed an entire AMR-based manufacturing concept, which they call the “microfactory,” for the efficient manufacturing of electric vehicles. 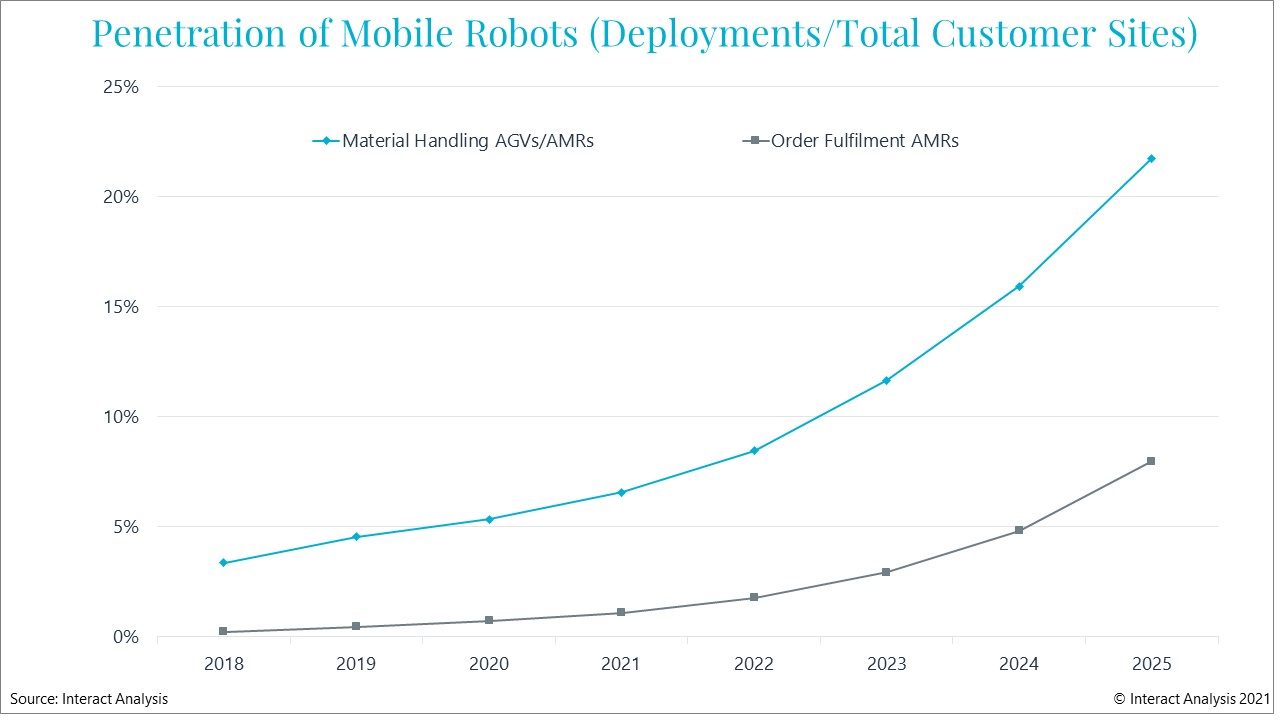 Deployments of all kinds of AMRs are forecast to grow significantly between now and 2025. Courtesy: Interact Analysis

Warehouse job openings at an all-time high, despite significant unemployment

At the end of 2020, less than 1% of warehouses had deployed AMRs which support order fulfillment, and material handling robots, which are a much more mature technology, were present in just over 5% of warehouses and manufacturing facilities. The pandemic was a double-edged sword for the mobile robot sector. The spike in e-commerce coupled with reduced throughput through enforced social distancing fueled the need for automation, but at the same time companies were reluctant to take the risk and invest, leading to a drop in sales in the first half of 2020. But it is increasingly evident that warehouse automation is the solution to the acute scarcity of labour; and the continued unprecedented demands put on warehousing by e-commerce, in terms of volume, speed and efficiency requirements. Mobile robots, particularly AMRs, are predicted to play a starring role.

AMRs are going to see real growth out to 2025. Although the need for additional sensors adds cost to these machines, they have particular advantages over AGVs, as there is no need for the operational infrastructure which AGVs require, and deployment can be much quicker. Sensors aside, the purchase price of a small sortation AMR can be as little as $4,000, and the average price for AMRs stands at approximately $20,000, compared to $75,000 for AGVs. The ‘natural navigation’ technology in the AMR is being applied to more and more robotic solutions, so gradually AGVs are being superseded by AMRs.

All this is happening even though AMRs do not operate with the same precision or point-to-point speed as AGVs. And, as AMRs with higher and higher payload capabilities (up to 1,350 kg) are being produced, they are becoming popular in new market segments, such as pallet conveying. AMRs are gaining a particularly strong foothold in order fulfillment roles in logistics centers, where the nature of their autonomous technology means they can be deployed in large numbers at single sites. While AGVs still accounted for over 50% of all mobile robot revenues in 2020, this is expected to drop to under 25% by 2025. Meanwhile, QR Bots (AMRs that use QR codes for navigation) will actually account for 50% of all shipments throughout the forecast period, but their revenues are much smaller. 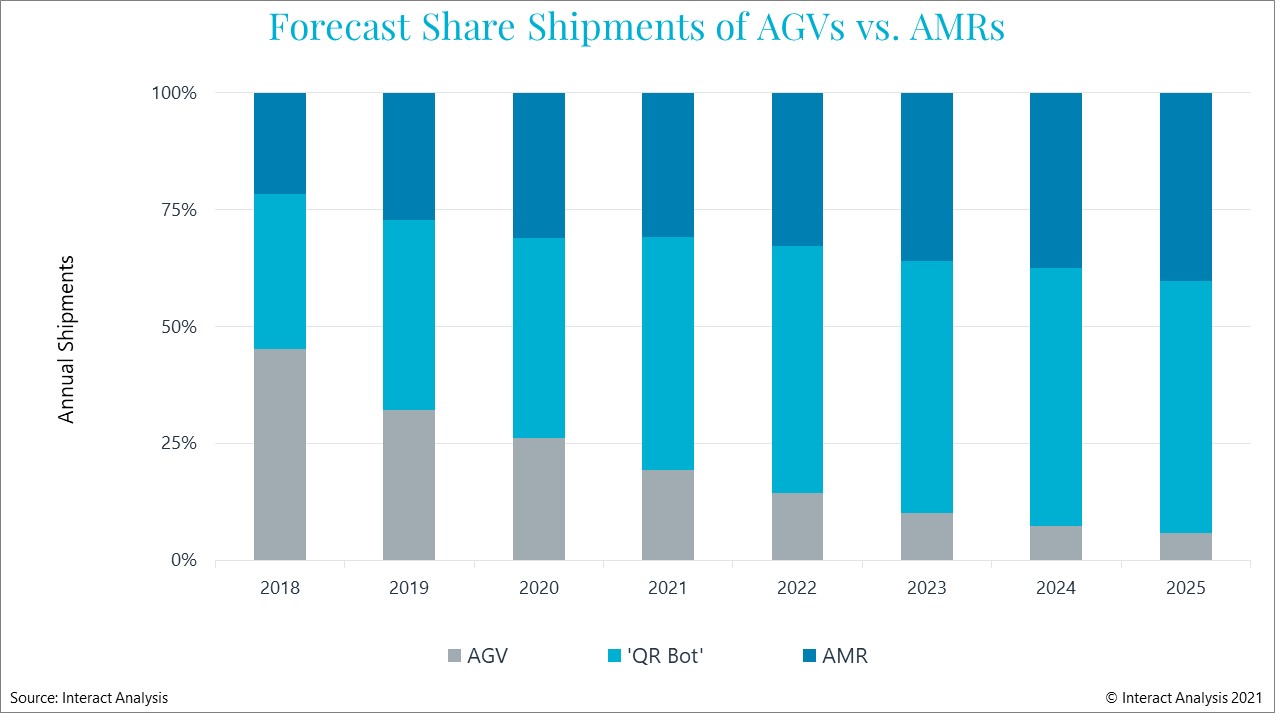 With 2.1 million mobile robots predicted to have been shipped by the end of 2025 including 860,000 in that year alone, generating annual revenues of $18 billion, the future looks exceptionally strong for AGV and AMR manufacturers.

Despite several recent high profile acquisitions in the warehouse automation industry, talk of a period of upcoming consolidation is premature. The warehouse automation market is still at a nascent stage, and hence is open to technological innovation which continues to feed a growing number of new market entrants.

The post More than 50,000 factories to have mobile robots by end of 2025 appeared first on Control Engineering. 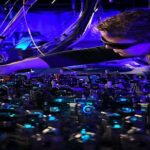