The National Electrical Manufacturers Association (NEMA) announced Debra Phillips will be the next president and CEO of NEMA. Phillips will succeed Kevin Cosgriff, who is retiring at the end of 2021.

Phillips joins NEMA from the American Petroleum Institute (API), where she led the Standard-setting, revenue-generating businesses and global operations division as senior vice president of Global Industry Services. Phillips previously served as vice president of sustainability at the American Chemistry Council and earlier in her career held director and engineering positions in private-sector chemical and manufacturing companies.

“I am honored to be joining the NEMA team and an industry that enhances the lives of Americans every day while pioneering innovations that spur long-term infrastructure modernization and economic growth,” Phillips said in a press release. “I look forward to continuing the work of the talented NEMA team during an inflection point when digitalization, energy security, connectivity and workforce of the future are critical issues for NEMA Members, businesses and consumers alike.”

“It has been a privilege to serve such exceptional and important Member companies and lead a truly wonderful team,” he said. 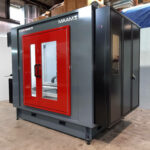