It might be time to rethink our relationship with ‘Mother Earth’

When I was a little kid, a very close friend had a very cute oversized T-shirt with a childlike drawing of the Earth printed on it and the sweetly scripted commandment: “Love Your Mother.” The shirt was a tent when we were fourth-graders, billowing over primary-color leggings and dirty sneakers. But by high school, it had become soft and a little snug and more than a little ironic given that we, as teen girls, were inexplicably and consistently mean to our actual mothers.

Many would agree that the idea of “Mother Earth,” that dear old cliché of the environmental movement, has become equally worn out. There’s little doubt that the concept of “Mother Earth” is well intentioned: Think of the Earth as someone you love — your mother! Who could you love more than that? Treat her with respect and care and she will provide for you in perpetuity.

That advice immediately begins to fall apart, however, when you consider the societal-level sacrifices climate experts say we humans need to make in order to avert the worst consequences of global warming. Thinking of Earth as a mother hasn’t inspired much in the way of filial piety. You might even say the relationship has become toxic — or at the very least, extremely one-sided.

But if our view of Earth as a mother hasn’t done her any favors, what are our alternatives? One option is to think of the planet in slightly more intimate terms. Environmental activists, artists, and romantic partners Beth Stephens and Annie Sprinkle are considered to be the cofounders of the ecosexual movement — a philosophy in which we cherish the Earth as a kind of romantic life partner. In their new book Assuming the Ecosexual Position, they urge you — yes, you, inhabitant of this planet — to consider taking the Earth as a lover. My own personal aversion to the phrase “take [x] as a lover” aside, the intention here is pure. If you develop a relationship with the earth as intimate and caring as one you might have with a significant other, you’ll care for it.

Here’s where things get a little bit alternative, even for the Savage Love devotees among us. Ecosexuality is more than a thought experiment: Stephens and Sprinkle have held wedding ceremonies between themselves and the Appalachian mountains. They’ve married the moon, the soil, the sky. Relationships with the earth are meant to be polyamorous and sensual; the definition of a sexual experience, for example, should extend beyond whatever happens between two human bodies to what happens between a human body and the springtime sun, morning air, alpine lake water. If there’s not sufficient pleasure in the relationship, after all, there’s less incentive to preserve it. The artists “think about sustainability a lot differently than other people do;” in that if a particular practice isn’t at least a little bit fun, you won’t keep doing it.

So why the emphasis on a romantic, sexual connection? “There’s an urgency to please one’s lover, where there’s not so much with your mother or friend,” explains Stephens. “I feel like with a lover, I’m more aware of my missteps. A lot of people take their mothers or friends for granted.”

Stephens and Sprinkle elaborated on their approach during a long phone conversation over breakfast in their San Francisco kitchen. They said they consider themselves “matchmakers, trying to help people fall in love with everything around them.” Sprinkle pointed to the recent oil spill in her native Southern California to illustrate their point.

“If you really really deeply love the beach, and feel a real heart connection and concern, and imagine the beach is alive and it’s sentient, you’re gonna be more heartbroken and want to protect that beach from the horrible tar,” she said.

There is certainly something appealing about this ideology. The world is your love, your love, the world; sounds like a nice life! (As Sprinkle says: “When you’re an ecosexual, you’re never alone!”) We have to admit that over the history of humans on Earth, the bar for “environmental care” has been lowered so far it’s in hell. Any meaningful improvement would require a real transformation in how we see the ecosystems and natural features around us, and believing you can fuck a mountain would certainly constitute a significant transformation.

But the more I thought about human relationships as a template for environmental responsibility, I began to wonder if there’s any status — particularly of the romantic or sexual variety — that ought to be ascribed to our connection to the world around us. How many times have you mistreated, or neglected, or made false promises to someone you loved? How many sexual relationships have you been in with no semblance of real care or compassion? How many deeply dysfunctional romantic relationships have you shaken your head at, be it listening to chatter in a bar bathroom line or on deep in the comment thread on social media?

The truth is, humans hardly have a flawless track record at caring for their same-species lovers. It’s unclear to me that the planet would fare much better with this framing. Granted, these may simply be the cynical views of someone who has seen too many breakups. In our conversation, Sprinkle and Stephens acknowledged that they’re speaking to the “walking wounded,” as far as relationships go, and hope that some of their ecosexual [lessons] can carry over to inform and improve interhuman relationships as well.

The idea of caring for the Earth as you would a person is not new — something that Sprinkle and Stephens fully acknowledge in their work. Many Indigenous cultures ascribe (nonsexual) feeling and thought and entity to any number of ecosystems, geological formations, forests, rivers, animals. Nick Estes, a Lakota scholar and activist, has written evocatively about the cultural tradition of understanding one’s environment as one’s relative:

When we emerged, we were pitiful creatures, the ikce wicasa, the common people, who depended on our relatives the Pte Oyate, the buffalo nation, and the Mni Oyate, the water nation, to give us life. Hence the phrase, Mni Wiconi, water is life. They protected us and cared for us. And we must ask, where are those nations today, our relatives who helped us realize our own humanity? How are we protecting them and taking care of them today?

I spoke with Rosalyn Lapier, professor of environmental studies at University of Montana and a member of the Blackfeet Nation, about this relationship between humans and the land. Lapier says that in the tradition of her tribe, there are both physical and metaphysical worlds, and metaphysical beings can inhabit rivers or woods or hillsides, which then become sacred places.

“For the Blackfeet tribe, you want to create a relationship with a supernatural entity because in Blackfeet cosmology, supernatural entities run the world and humans do not,” Lapier explains. “So for humans to live a good life, it’s important for them to have a relationship with multiple, not just one, supernatural entities.” The way those relationships are maintained is through communication and offerings, in which humans visit those sacred places to bring food and gifts and pray to them (to use Western terminology). There’s some quid pro quo, Lapier explains — the supernatural ally is helping the human, but the human is also helping to protect them and their home. “It’s based on reciprocity, it’s not a one way street.”

Moreover, the movement for “environmental personhood” is a legal mechanism that some tribes have attempted to use to protect those sacred places, such as the Yurok tribe’s 2019 designation of the Klamath River in southern Oregon. The idea is that a natural formation should have the same legal rights as a person — which corporations are infamously afforded — but it hasn’t yet succeeded in the American judicial system. A 2017 case sought to protect the Colorado River as a person, but it was eventually dropped. A similar protection of Lake Erie’s right to “exist, flourish, and naturally evolve” passed by the city of Toledo, died in court in February 2020.

A common thread here seems to be one of mutual care, however unromantic that may seem. If the Colorado River dries up, tens of millions of people will suffer. If Western forests are not adequately protected and cared for, they might fuel catastrophic wildfires. If the atmosphere becomes overwhelmed by too many greenhouse gases, well, we all know what’s going to happen.

Meaningfully transforming your relationship with the Earth may seem like a low-priority climate ask, but I, for one, am at the point of “no task too small, no approach too outside-of-the-box” if there’s a chance it’s effective. If imagining all of these parts of our ecosystem as people that you care for, romantically or familiarly or however, helps inspire you to fight for the fate of the planet then why the hell not?

As Sprinkle herself says: “Different archetypes work better for different people. We’re not trying to get people to imagine the Earth as lover unless they want to! For a lot of people, it doesn’t resonate. They’re like ‘Nope, not going there. That’s my mom!’

This story was originally published by Grist with the headline It might be time to rethink our relationship with ‘Mother Earth’ on Oct 11, 2021. 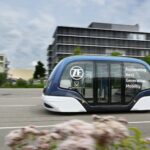 ZF and Oxbotica to develop Level 4 autonomous vehicles
Cutting methane emissions is the fastest way to slow warming. Here’s how.