Intel’s glitch with a GPU chiplet that will be part of its upcoming Meteor Lake processor will slow the rollout of 3 nm process technology at Taiwan Semiconductor Manufacturing Co. (TSMC), according to analysts.

Production of the tGPU (Tile GPU) chiplet at TSMC, initially planned for the second half of 2022, was delayed to the first half of 2023 due to design and process–verification issues, Trendforce said in a press statement. More recently, Intel again delayed its production schedule to the end of 2023, according to the Taipei–based market watcher.

An Intel spokesperson told EE Times that in the company’s recent second–quarter 2022 earnings call, CEO Pat Gelsinger said, “In 2023, we will deliver our first disaggregated CPU built on Intel 4, Meteor Lake, which is showing good health in both our and our customers’ labs.”

Intel and Apple are the main customers for 3 nm chips from TSMC, which is ramping up the new process node this year, according to three analysts surveyed by EE Times. Intel has increased its reliance on the world’s largest chip foundry in a bid to boost sales and eventually overtake TSMC as the world leader in manufacturing scale and chip process technology.

Intel’s slowdown nearly curtails the company’s 3 nm production in 2023, with only a marginal amount of wafer output remaining for engineering tests, according to Trendforce.

The reported Intel delay is consistent with the views of Mehdi Hosseini, senior equity research analyst at Susquehanna International.

TSMC will have two variations of the 3 nm process: N3a and N3b.

Apple will develop its M2 processor using the N3b process, which will also be adopted by Intel and Qualcomm, Hosseini explained.

“I expect the overall 3 nm capacity to be in the 30–40k wafer per month [range], which is not much,” he said. N3e is a process node that will attract wider application and products that will be ready for production in 2024, he later added.

The glitch leaves Apple leading the first wave of TSMC’s 3 nm clients from the second half of 2022 to the start of 2023, with products including Apple’s M–series chips and the A17 bionic chip, according to Trendforce.

Supply chain issues in the chip industry that started more than two years ago during Covid have continued to create shortages, forcing manufacturers of smartphones and cars to shutter factories and furlough workers. Chipmakers are investing record amounts in expansion to catch up with demand. Governments worldwide are also offering subsidies to chipmakers for investments in local production that would help secure supplies.

Due to the high cost of 3 nm expansion, the Intel delay will affect TSMC’s 2023 capital expenditures, resulting in a lower capex in 2023 than in 2022, Trendforce predicts.

Last month, TSMC pared back its plan to spend more than $40 billion this year for capacity expansion. The outlook for demand has worsened on expectations of an inventory reduction in the PC and consumer electronics segments.

To fill the gap left by Intel, TSMC may be looking at other advanced–process clients, including AMD, MediaTek, and Qualcomm – all of which plan to make 3 nm products in 2024, according to Trendforce.

Intel has outlined its Meteor Lake plans, which include TSMC.

“The Meteor Lake compute tile will be manufactured using our leading–edge Intel 4 process technology, with some supporting tiles manufactured at TSMC,” Intel’s Senior Vice President, Stuart Pann, said in an August 2021 blog. A tile is Intel’s parlance for what’s known in the semiconductor industry as a chiplet.

If Intel fails to meet its schedule for advanced–node production in house, the company is more likely to outsource its computing tiles to TSMC. But if Intel stays on track, the company will probably cut orders at TSMC, Trendforce said.

[This article has been updated. EE Times originally reported that Intel was not available to provide comment. Intel has since indicated that they expect to deliver their first disaggregated CPU built on Intel 4, Meteor Lake, in 2023. -ed. ] 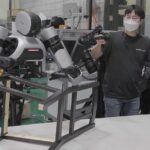