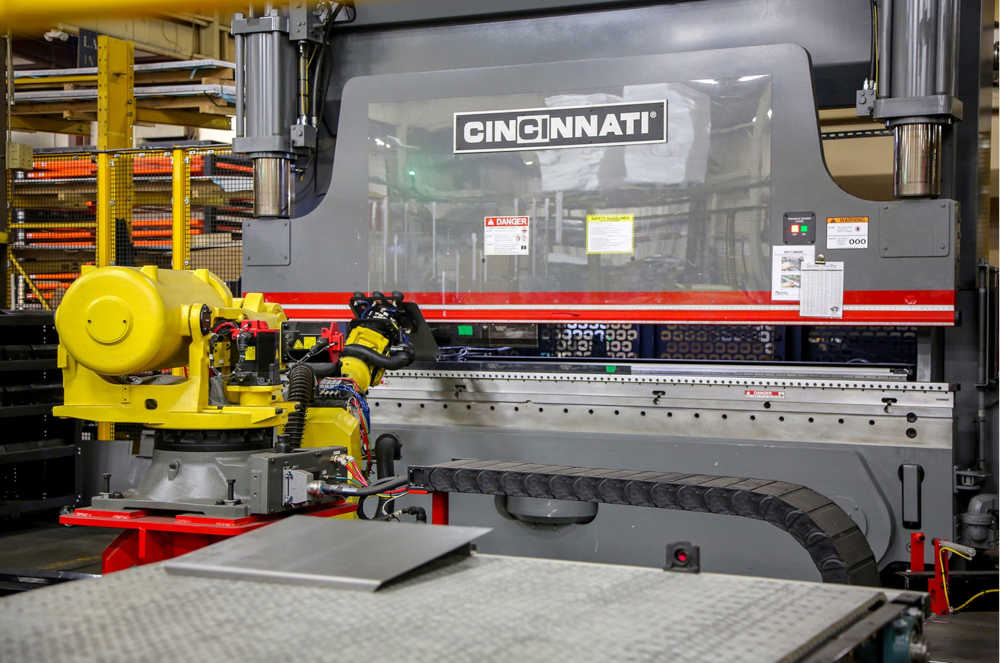 Integrated stepper motors were designed into a series of sheet metal–bending press brakes from Cincinnati Inc. (CI), a machine tool manufacturer.
The press brakes have one or more motorized edges called backgauges, which serve as dimension and orientation references. Much like a professional-grade table saw’s rip fence, backgauges on industrial press brakes help operators accurately position material against tooling.

Material shaped by a press brake is manually or automatically pushed into and held against the backgauges. Then a press mold lowers into the material to crimp, curve or bend it. To reduce design costs and maintain quick and precise positioning of backgauges before each metal-forming cycle, CI chose integrated stepper motors.

The press brakes made by Cincinnati Inc. range from 40-ton-capacity machines for bending 20-gauge material to pairs of 2,000-ton press brakes working in tandem to bend 4-in. metal plates. The metal pieces shaped on press brakes are found in a vast array of goods and vehicles, including:

Press brake backgauges use one to six electric motors (often servomotors) to position workpieces in multiple directions. Those with six motorized reference surfaces provide two reference points in each direction of 3D space for the reliable forming of complicated parts. Most new press brakes come standard with multi-axis motorized backgauges. CI used two “motors for the backgauge vertical axis — called the R-axis on press brakes. Then we use other motors for the X- and Z-axis on the horizontal plane,” said CI electrical engineering manager Bill Molleran.

The motors are integrated stepper models with a NEMA 34 frame size and torque capabilities of 3.5 Nm.

CI switched to these steppers on the vertical axis as a cost-efficiency initiative. Previously, the vertical axis was moved by permanent magnet brush servomotors, a separate controller, and spring-set electric brakes. Getting the functions of all those components from a pair of integrated stepper motors yielded lower costs. The stepper motors include a closed-loop servo drive servo mechanism, following the speed/torque curve, and maximizing motor-drive performances.

This efficient unit is designed to optimize torque/frame ratio, reducing the heat and noise level of a standard stepper motor.

The stepper motors drive ball screws for up to 8 in. of the R-axis stroke. They are part of the backgauge’s payload as they ride on the horizontal axis. Their lightweight and compact size help the design’s dynamics. In addition, accuracy is comparable to that delivered by the previous motor.

“With the stepper motor’s encoder, we gained higher resolution – though it required us to change the motor-to-screw belt ratio,” Molleran said.

More specifically, servomotors are generally low-torque, high-speed motors, and stepper motors often are high-torque, low-speed motors; thus, they have different rpm sweet spots. That meant Molleran’s team had to scrap their old design’s belt reduction by adding a big sheave on the motor output shaft and a small sheave on the ball screw, which helped increase resolution. 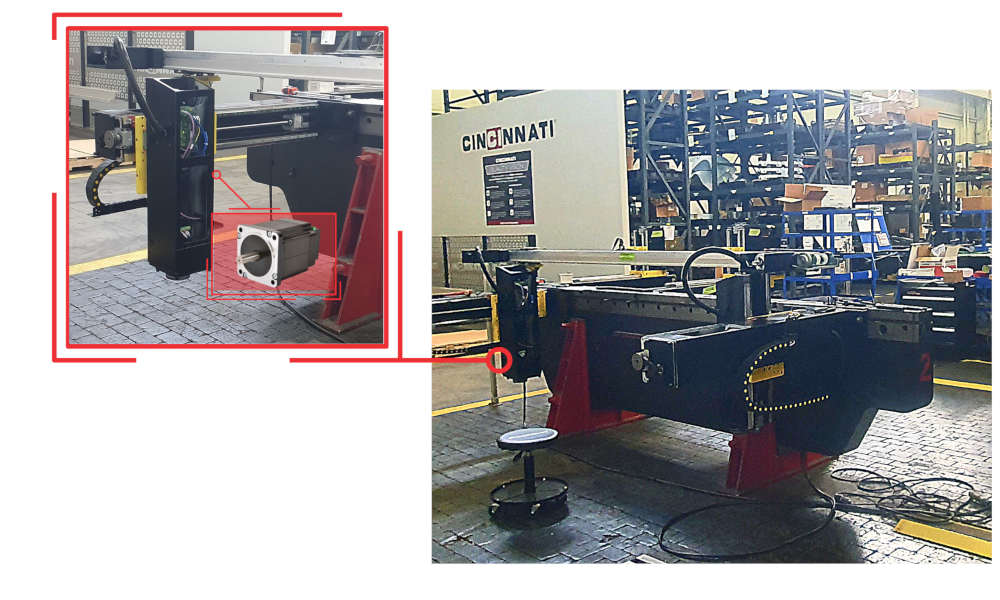 The integrated stepper motors operate closed-loop and communicate via CANopen. “We need CANopen connectivity for our press brakes and compatibility with the CAN CIA 402 substandard — formerly DSP402 — for motor controllers,” said Matt Garbarino, director of product marketing at CI.

“CANopen motor controller communication is common and established, and something CI has been using for a long time. Things are moving toward EtherCAT and other Ethernet-based technologies, which seems to be the way of the future,” Molleran said.

The motor was integrated with the CANopen-capable controller in CI’s press brake. Compatibility with the existing CI press brake machine control architecture meant little redesign work for CI engineers. The all-in-one format with electronics integrated into the motors makes for a cost-effective and compact solution.

Since the integrated stepper motors incorporate control electronics, CI was able to replace several different parts with one.

“We previously had to buy a brake from one company, a controller from another, and motors from a third… and then deal with all the integration,” Molleran said. 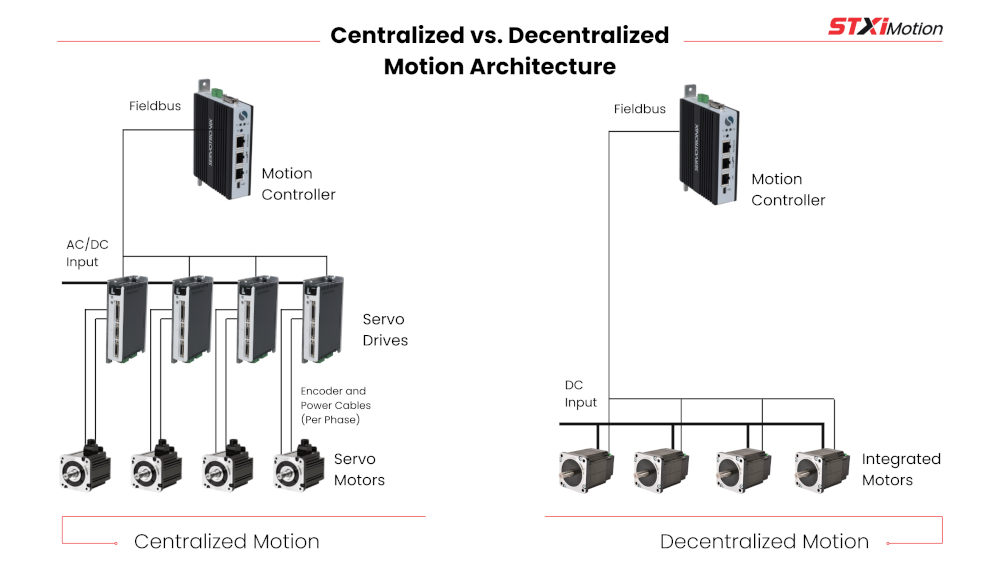 Integrated motors reduce machine wiring, as in the case of CI, where the controller is located near the backgauge, eliminating long wire runs.

“Instead of passing encoder, brake, and motor phase information back and forth over home run cables to a centrally located controller in a control cabinet, integrated motors only need power and CAN fieldbus connections. The latter is suited for long distances,” Molleran said.

“Because we were already mounting the motor within a well-sealed system, we didn’t need the IP65 version with sealed connectors. In fact, this motor’s terminal blocks for connections are easy to wire and less expensive than sealed connectors,” Molleran said.

48 Vdc power coming into the drive serves as a keep-alive backup to a 24 V logic supply, which, in turn, keeps the logic circuits powered to avoid any need for rehoming or resets upon any power disconnection. The motor drive includes some input/outputs (I/Os), though CI uses only one home referencing switch for this application, employing the feedback of a proximity sensor. Before using integrated motors, CI employed other I/O modules for separate brake communications and power circuitry. Now, all of that is integrated within the motor itself.

The motor also allowed for the elimination of encoder feedback. “With the previous system, we sourced the encoder separately and built it on the back of the motor,” Molleran said. “To do so required us bolting a brake to the front of the motor and wiring it all together to the controller, but now, the encoder is already in the package with the integrated motor.”

Every CI press brake comes with a touchscreen PC controller that runs on the Microsoft Windows 10 OS and serves as an HMI, although none of the machine logic executes on the PC controller’s human-machine interface (HMI). Instead, machine controls take the form of a separate microcontroller on a circuit board that CI built in-house. The microcontroller runs a real-time operating system and motor, servo system, and hydraulics controls. CANopen provides connections to system motors.

Commissioning software to complement these controls was a key factor for CI. “We’ve had various degrees of success integrating different manufacturers’ CAN drivers.” Software used went in seamlessly, Molleran said. “There’s a lot of variation in how well manufacturers support the DS402 standard we employ. Complicating matters is how this standard is also flexible.”

He added, “At times, CI has had to develop custom drivers to make suppliers’ software work. But I didn’t have to make any major software changes to add the stepIM commissioning software to our system. That was another item that dropped in without headaches.”

Molleran continues, “There have always been wrinkles that would force us into software changes on our side beyond just changing configuration values. It’s a highly configurable control… but manufacturers who use weird velocity units such as rpm per second for acceleration — mixing minutes and seconds, for example — well, that requires some adjustment.” This project avoided those adjustments.

CI sells one to two dozen press brakes per month and has 58,000 machines in the field. The company has supplied brake presses since the 1970s and now sells all-electric machines using roller screws and hybrid servo pumps for 21st-century efficiencies. For future iterations of its press brake backgauges, CI is considering using integrated servomotors primarily to improve backgauge speed.

“Even an over-torqued servomotor only temporarily slows down… and then resumes top performance upon system correction,” Molleran said.

CI still uses separate controllers and brushed servos on its backgauges’ horizontal axis and is keen on changing them to integrated servo motors. However, cost constraints and COVID-related supply chain issues have delayed the design upgrade.

“But we’re due to get integrated servomotor samples any day now and are excited about the possibility of improving our design and trimming more costs,” Molleran said.

In addition to their compact size, integrated drive-motor solutions eliminate the need for a separate drive, minimizing footprint and connecting cables. Particularly when using multi-axis machines, the saving becomes critical in wiring and cabinet costs and size while improving the machine’s overall performance. 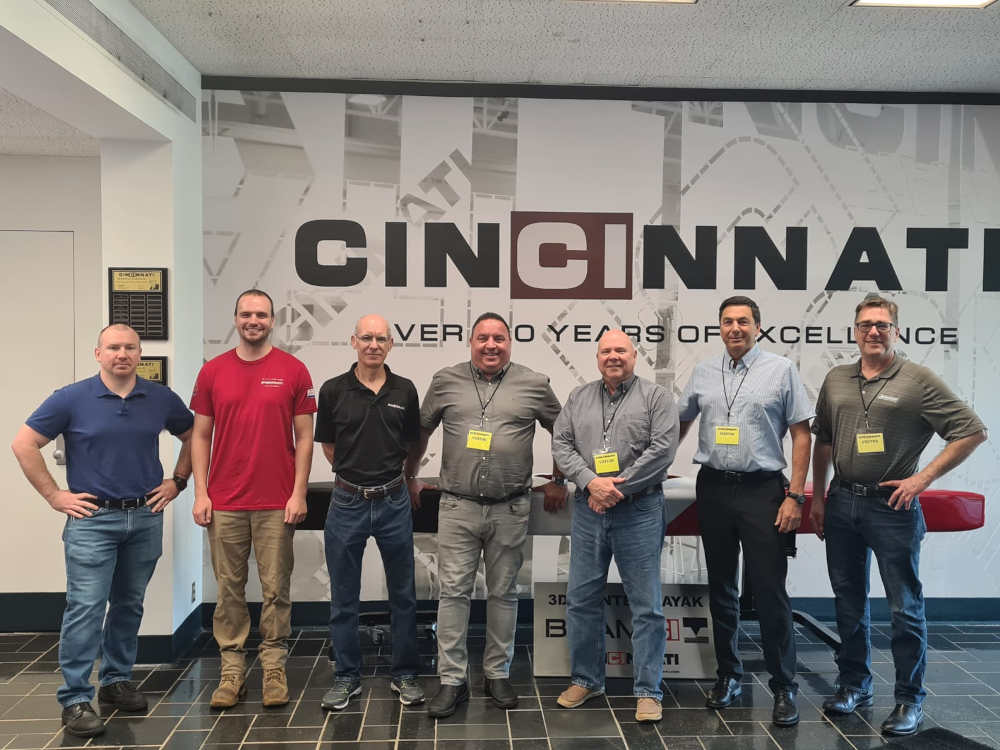 Have you recently update machine or line motion controls?

IMTS 2022 Conference: Getting the Most from your Robot Investment for Machine Tending
Airbus Helicopters to build a test center for CityAirbus NextGen