Gus Grissom and the ‘Hatch Crap’

For six decades, the reputation of one of America’s most distinguished astronauts has been stained by the myth that he panicked at the end of his first spaceflight.

Virgil I. Gus” Grissom’s textbook suborbital flight aboard a Mercury spacecraft christened Liberty Bell 7 was marred by a botched recovery when a new and unqualified hatch prematurely detonated. Grissom suffered the twin indignities of losing both his ship, which sank in the Atlantic Ocean, and years of second-guessing by NASA managers about what precisely happened at the end the flight on July 21, 1961.

The suggestion that Grissom had deliberately or accidently blown the hatch prematurely was advanced by the book and film, The Right Stuff. Tom Wolfe’s account of the end of Grissom’s flight is fiction. Sixty years later, a colleague and I believe we have salvaged Grissom’s reputation.

In a detailed account published on the 60th anniversary of Grissom first flight, digital enhancement expert Andy Saunders and I make the case that electrostatic discharge generated by a recovery helicopter is the most likely reason Liberty Bell 7’s hatch blew prematurely.

Saunders remarkable enhancement of recovery footage confirms the actions and observations of the person closest to Grissom’s spacecraft when the hatch blew: Marine Corps Lieutenant John Reinhard, co-pilot of the primary recovery helicopter.

Standing in the side door of Hunt Club 1, which was hovering over Grissom’s ship shortly after splashdown, Reinhard can for the first time be seen reaching down with a pole resembling a tree pruner to cut a whip antenna Grissom had deployed after hitting the water. The antenna allowed the astronaut to communicate with the recovery forces. But it had to be cut by Reinhard so the helicopter could move in the hook on to Grissom’s ship.

Grissom would then arm the exploding hatch, detonate by hitting a plunger after Hunt Club 1 hooked on and lifted the hatch sill above the water line. A horse collar lowered by Reinhard would be waiting for Grissom.

That was the plan, but sources told us recovery procedures likely received short shrift as NASA managers focused on getting the second American up and down in one piece. The lack of recovery training and the failure to properly qualify a critical spacecraft component that was flying for the first time made the 11 minutes after that splashdown the most dangerous moments of Grissom’s 15-minute spaceflight.

Reinhard (who died last year) told researcher Rick Boos he observed an arc when he reached down with his “cookie cutter” to sever the whip antenna. The squib-actuated device was on two separate circuits that both fired without Reinhard activating them. The next thing Reinhard saw was the hatch flying off and Grissom baling out of his sinking spacecraft, which was ungrounded.

Grissom made one mistake: He armed that hatch detonator before Reinhard hooked onto his spacecraft. Grissom told investigators he was sitting in the spacecraft waiting for Hunt Club 1 to move in when the hatch blew and water poured over the sill. He removed his helmet, grabbed the cockpit display panel and wedged his 5-foot, seven-inch frame through the hatch opening.

A probe followed, but NASA managers were anxious to move on to John Glenn’s orbital flight. Investigators were never able to recreate the conditions on the day of Grissom’s flight. Electrostatic discharge was considered as a cause but never confirmed.

Andy Saunder’s remarkable images tell a different story, for the first time confirming what John Reinhard said he did and saw. Read the full story here, and judge for yourself.

We conclude that electrostatic discharge is a plausible explanation for what happened at the end of Gus Grissom suborbital flight. Sixty years later, our findings exonerate Grissom for the loss of his spacecraft, at last putting an end to what the veteran astronaut referred to as the “hatch crap.”

–George Leopold is the author of Calculated Risk: The Supersonic Life and Times of Gus Grissom.

The post Gus Grissom and the ‘Hatch Crap’ appeared first on EETimes. 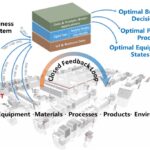