GE Aviation and Safran have launched a technology development program targeting more than 20% lower fuel consumption and CO2 emissions compared to today’s engines. The CFM RISE (Revolutionary Innovation for Sustainable Engines) program will demonstrate and mature a range of new, disruptive technologies for future engines that could enter service by the mid-2030s.

The companies also signed an agreement extending the CFM International 50/50 partnership to the year 2050, declaring their intent to lead the way for more sustainable aviation in line with the industry’s commitment to halve CO2 emissions by 2050.

“The relationship between GE and Safran today is the strongest it has ever been,” said John Slattery, President and CEO of GE Aviation. “Together, through the RISE technology demonstration program, we are reinventing the future of flight, bringing an advanced suite of revolutionary technologies to market that will take the next generation of single-aisle aircraft to a new level of fuel efficiency and reduced emissions. We fully embrace the sustainability imperative. As we have always done in the past, we will deliver for the future.”

“Our industry is in the midst of the most challenging times we have ever faced,” said Olivier Andriès, CEO of Safran. “We have to act now to accelerate our efforts to reduce our impact on the environment. Since the early 1970s, breakthrough engine efficiency and reliability have been the hallmark of our historic partnership and our LEAP engine already reduces emissions by 15% compared to previous generation engines. Through the extension of our CFM partnership to 2050, we are today reaffirming our commitment to work together as technology leaders to help our industry meet the urgent climate challenges.”

Technologies matured as part of the RISE Program will serve as the foundation for the next-generation CFM engine that could be available by the mid-2030s. The program goals include reducing fuel consumption and CO2 emissions by more than 20% compared to today’s most efficient engines, as well as ensuring 100% compatibility with alternative energy sources such as sustainable aviation fuels and hydrogen.

Central to the program is state-of-the-art propulsive efficiency for the engine, including developing an open fan architecture. This is a key enabler to achieving significantly improved fuel efficiency while delivering the same speed and cabin experience as current single-aisle aircraft. The program will also use hybrid electric capability to optimize engine efficiency while enabling electrification of many aircraft systems.

The program is being led by a joint GE/Safran engineering team that has laid out a comprehensive technology roadmap including composite fan blades, heat resistant metal alloys, ceramic matrix composites (CMCs), hybrid electric capability, and additive manufacturing. The RISE program includes more than 300 separate component, module, and full engine builds. A demonstrator engine is scheduled to begin testing at GE and Safran facilities around the middle of this decade and flight test soon thereafter.

The original 1974 framework agreement creating CFM International as a 50/50 joint venture between the two aircraft engine manufacturers redefined international cooperation and helped change the course of commercial aviation. The partnership was renewed in 2008 for the launch of the LEAP program. Today, CFM is the world’s leading supplier of commercial aircraft engines. More than 35,000 CFM engines have been delivered to more than 600 operators around the globe, accumulating more than one billion flight hours.

The US wants to make EV batteries without these foreign metals. Should it? 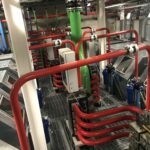