On Friday, video footage emerged of Indigenous Maasai people running and scrambling for cover from gunfire in the United Republic of Tanzania. The videos reveal chaos as the Maasai try to escape state security forces, and photos released in the aftermath of the incident show bloody injuries and bullet wounds. In Loliondo, in northern Tanzania, the Maasai are being violently evicted from their land as part of an effort to create a game reserve. Maasai leaders have been arrested, dozens of community members have been shot or wounded, and hundreds have fled to Kenya for safety and medical attention. Others are determined to remain in their homeland. “I won’t go until the last point of our life,” said a Maasai leader who asked for anonymity because they fear retaliation. “I can’t run out of home my grandparents’ lands [sic].”

According to a new report from Project Expedite Justice, a non-profit focused on international human rights, the forced removal of the Maasai in Tanzania is part of a growing, global trend known as fortress conservation which often includes violently clearing Indigenous peoples from their homelands in order to create “protected areas”—lands dedicated to conserving nature. The report focuses on Tanzania, Nepal, India, Uganda, Cameroon, the Democratic Republic of the Congo, and the Republic of Congo and identifies human rights abuses carried out in the name of conservation.

“Policies that conservation organizations are using are not considering the fact that Indigenous peoples were the first people to actually practice conservation,” said Trésor Nzila Kendet, the director of Development Actions Center who works on Indigenous People’s rights in the Republic of Congo and contributor to the report.

The report identifies a pattern of abuses with three distinct parts in all ten countries: Indigenous people are removed from their land, face gross human rights violations like murder and rape, and experience what the authors call “indirect human rights violations” that include loss of culture and lack of access to important sites.

According to the report, national governments, nonprofits, and international organizations are all involved in fortress conservation models. The World Wildlife Fund (WWF), for example, is named in eight of the report’s ten case studies. The WWF was the subject of a 2019 BuzzFeed investigation that documented their funding for guards who killed Indigenous people. A recent report on Kahuzi-Biega National Park in the Democratic Republic of the Congo revealed that park guards, supported by a range of foreign governments and organizations including the Wildlife Conservation Society (WCS), carried out murders, torture, and group rape of the Indigenous Batwa in an apparent effort to enact fortress conservation policies. In 2020, the U.S. halted its funding to WWF and WCS based on reports of widespread abuses.

“It’s important to show the pattern in different parks to show how important the present situation is and to make the perpetrators of those situations understand that this is a reality and it has to stop,” said Nzila Kendet.

The report calls for a change to the global conservation model, warning that the violence highlighted in the report could be a preview of more threats to Indigenous people and land. “There is a model that is problematic,” said Nicolás Süssmann-Herrán, the report’s lead author. “If you keep implementing it you’re going to arrive at the same results. So what needs to change is the model.”

In Tanzania, ongoing efforts to dispossess the Maasai of their land in Loliondo have been widely condemned, including by the African Commission on Human and Peoples’ Rights, which released a statement calling on Tanzania to halt the evictions, reinstate the Maasai to their homes, and reopen the conservation plan for discussion.

“What we’re seeing with the Maasai at the moment is the demonstration of fortress conservation,” said Süssmann-Herrán.

This story was originally published by Grist with the headline ‘Fortress conservation’ violently displaces Indigenous people on Jun 15, 2022. 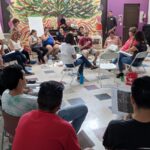 As a heat wave grips the US, lessons from the hottest city in America