FAA Fumbled Its Response To a Surge in GPS Jamming

FAA air traffic controllers supervising flights over Arizona, New Mexico and Texas were confused and frustrated by an increase in military tests that interfered with GPS signals for civilian aircraft, public records show.

The complaints accused the FAA of denying controllers permission to ask the military to cut short GPS tests adversely affecting commercial and private aircraft. These so-called “stop buzzer” (or “cease buzzer”) requests are supposed to be made by pilots only when a safety-of-flight issue is encountered.

“Aircraft are greatly affected by the GPS jamming and it’s not taken seriously by management,” reads one report. “We’ve been told we can’t ask to stop jamming, and to just put everyone on headings.”

In a second report, a private jet made a wrong turn into restricted airspace over the White Sands Missile Range in New Mexico after being jammed. On that occasion, the air traffic controller called a stop buzzer. “[The] facility manager on duty later informed me we can’t ask them to ‘stop buzzer’ and to just keep putting aircraft on headings,” their ASRS report reads.

Putting an aircraft on headings requires giving pilots precise bearings to follow, rather than letting them perform their own navigation using GPS or other technologies. This adds work for controllers, who are already very busy at certain times of day.

“Busy traffic, bad rides, frequency congestion, then GPS jamming,” reads one report. “Limit the length and what time of the day that facilities can GPS jam and have it taken seriously when we call and ask them to stop.”

“Give controllers the ability to have White Sands stop GPS jamming during high traffic periods,” agrees the other.

The Pentagon uses its more remote military bases, many in the American West, to test how its forces operate under GPS denial. A Spectrum investigation earlier this year discovered that such jamming tests are far more prevalent than had previously been thought, possibly affecting thousands of civilian flights each year.

The FAA does not share how many stop buzzer requests are made, but Spectrum’s investigation obtained FAA data detailing four stop buzzers over the skies of California during a nine-week period in 2017. These included passenger jet flights operated by Frontier and Southwest.

The White Sands Missile Range (WSMR), whose tests appear to have caused the GPS jamming in both recent complaints, estimates it receives “in the low single digits” of stop buzzer requests a year.

A spokesperson for WSMR told Spectrum: “The US Army takes the safety of its operations extremely seriously. Calls for a cease buzzer are taken seriously and range control has not denied or ignored any cease buzzers. WSMR has also never requested or required any internal organization or outside agency to not make use of the cease buzzer in the event of an emergency, or unsafe event.”

The FAA provided the following statement:

“The FAA cooperates with Department of Defense to mitigate the effects of the military’s planned interference activities… to levels of acceptable risk. The primary mitigation when GPS is lost is for a pilot to use another means of navigation. Air Traffic Control (ATC) will assist the pilot with navigation on rare occasions, upon request. Should multiple pilots encounter problems, then ATC has the option to stop the underlying cause through [a] stop buzzer.”

When a stop buzzer call is made by a controller, the FAA then has a review process to analyze the appropriateness of the action and the associated operational risk.

However, an FAA source also admitted that one ATC facility “expressed some confusion as to the scope of their authority to suspend operations using stop-buzzer protocols when GPS testing had ramped up significantly.” The FAA now believes it has cleared up and abated those field concerns.

Although flight controllers may no longer be instructed not to issue stop buzzer calls when planes are in trouble, pilots continue to experience difficulties in the airspace around White Sands.

In May, the pilot of a light aircraft taking off at night in the Albuquerque area suddenly lost their GPS navigation and terrain warnings. Air traffic control told the pilot that WSMR was jamming, and instructed them to use other instruments. That pilot was ultimately able to land safely, but later submitted their own ASRS report: “Being unfamiliar with this area and possibly a different avionics configuration I feel my flight could have possibly ended as controlled flight into terrain.” 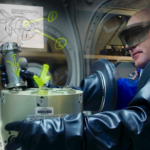