Enzyme-powered nano-sized robots hold exciting possibilities for biomedicine because they could navigate around the body autonomously to target tumors or specific organs. Now researchers show that it is possible to watch how groups of nanomotors behave in biological fluids and inside organisms using positron emission tomography (PET) to track their movements [Hortelao et al., Science Robotics 6 (2021) eabd2823, https://doi.org/10.1126/scirobotics.abd2823].

“Despite the growth in nanomedicine over the past decade, the delivery of newly engineered nanosystems to target locations is extremely low,” says Samuel Sánchez from the Institute for Bioengineering of Catalonia (IBEC). “The use of nanomotors could improve the transport of drugs and imaging contrast agents towards diseased locations due to their improved navigation across biological fluids. Our nanomotors move thanks to the use of endogenous fuels, already present in the body, such as urea, without the need for external equipment or actuation, which could constitute a significant advantage.”

The mesoporous silica nanoparticles, with surfaces functionalized using tiny gold nanoparticles and the enzyme urease, were designed by a team led by Sánchez in collaboration with Jordi Llop at the CIC biomaGUNE and the Universitat Autònoma de Barcelona. The nanomotors were also radio-labeled with two different positron-emitting isotopes so they can be tracked in vitro and in vivo using noninvasive PET imaging.

“We have demonstrated for the first time that nanorobots can be monitored in vivo through PET, a highly-sensitive non-invasive technique used nowadays in the biomedical environment,” says Llop. “[Being] able to see how nanorobots move together, like a swarm, and following them within a living organism is very important, since millions of them are needed to treat specific pathologies such as cancer tumors, for example,” adds Sánchez.

The nanomotors are driven by the catalytic decomposition of urea into carbon dioxide and ammonia, which releases ionic species in an asymmetric fashion. In a petri dish in the presence of urea, groups of the urease-functionalized nanomotors move better, show collective migration, and more uniform mixing than simple nanoparticles without the enzyme driver, as well as the ability to move through complex paths.

“Nanorobots show collective movements similar to those found in nature, such as birds flying in flocks or the orderly patterns that schools of fish follow,” points out Sánchez.

In vivo experiments, where the nanomotors are introduced into test mice intravenously, confirm that the enzyme-powered nanomotors can be easily tracked using PET. The researchers also injected the nanomotors directly into the bladder, where the concentration of urea is high enough to allow them to self-propel themselves uniformly throughout the cavity, unlike non-motile analog nanosystems.

The researchers believe that the results are a significant step forward in biomedicine, demonstrating that swarms of functionalized nanoparticle-based devices can move autonomously in biological fluids and inside organisms, opening the way for the use of nanorobotics in theranostic applications. Beyond the applications envisaged in this work in the context of bladder cancer, nanorobots could be particularly useful for delivering active agents for treatment in viscous media where poor vascularization limits traditional drug diffusion such as the gastrointestinal tract, eye, or joints.

“As different enzymes can be incorporated into the tiny motors, nanorobots could be tailored according to [a specific] part within the organism, adapting the device to the accessible fuel in the environment where they must move,” says Sánchez.

Since their discovery, interest in self-powered autonomous nano- and micromotors has grown rapidly, particularly for theranostic applications, points out Ayusman Sen, Verne M. Willaman Professor of Chemistry at The Pennsylvania State University.

“It is important to design self-powered systems that are biocompatible and use fuel sources readily available in the body. In the bladder, the presence of urea in relatively high concentrations allows the use of biocompatible urease-powered motors, of which [this work] is a beautiful illustration,” he told Nano Today. “One of the surprising collective behaviors reported is the observed swarming of the urease-powered micromotors. This is particularly significant because enhanced imaging and the delivery of optimal drug dosage will require the use of active nano/micromotor swarms since, for example, it is unlikely that a single or even a few motors could deliver enough drug to the disease site.”

One of the significant challenges in developing this approach, Sen suggests, will be to learn how to manoeuver active swarms of nanoparticles in tight spaces within the tissue microenvironment. 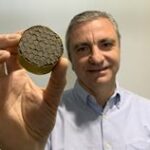 Meringue material could make jet engine sound like hair-dryer
What are AMCs and how are they made?