Consuming the Olympics is Easier with a Menu

A report last week by marketing company Zeta predicted this year’s Olympics will be the one of the lowest-watched Summer Olympic Games in this century (not that this century is that old). I understand there might be some confusion, holding the 2020 Olympics in 2021, and not changing the name. For those not paying a lot of attention, who wants to watch last year’s Olympics a year late?

A survey of 2,000 U.S. respondents cited other nontraditional aspects of this year’s games that has dampened interest: lack of live spectators and a return to travel following a year of being at home. People just aren’t prioritizing the Olympics in the way they may have five years ago when they hadn’t been locked inside for over a year. It’s not just the Olympics: There’s also been a falloff in interest for other high-profile TV events recently, including the Super Bowl, Grammys and Stanley Cup Finals.

But I always enjoy the Olympics, and this year is no exception. I tear up at the personal histories (and heartbreaks), marvel at the athleticism and love witnessing really hard work pay off. The Olympics are a feel-good event at a time when overall people are feeling pretty lousy.

Thanks to technology, we can watch more of the Summer Games than ever. I had no idea badminton was an Olympic sport until Roku’s Olympics hub showed me a list of all the sports I can watch and where I can find them. I have to check in on that just to see how the backyard game of my youth is supposed to be played.

There are a lot of different ways to watch the Olympics, and it’s great for the field hockey, shooting and handball enthusiasts who can’t watch those sports in primetime on the marquee NBC channel. I probably won’t watch half of the 41 sports taking place, but I love having the choice.

I also appreciate that NBC teamed up with Roku and others to make it easier to find Olympic events. Select the Olympics heading from the Roku homepage and you’re taken to a section devoted to all things Olympics. The splash page has a medal count by country. Sunday night the U.S. was in third place with 10 medals — four gold, behind Japan’s five and China’s six. I had to relearn that the team with the most medals isn’t listed at the top — it’s all about the gold. Tuesday it was nine golds for the U.S., one less than I anticipated after the U.S. women gymnasts took silver in the team final.

Go further into Roku’s Olympics section, and you can choose coverage by all 41 sports and where to watch them (Peacock, NBC, AT&T TV, Fubo, Hulu and Sling). My partner, Liz, was excited about the women’s foil fencing final on Sunday, looking forward to watching Lee Kiefer as she feinted her way to becoming the first American woman to win an Olympic medal in individual foil. That is, until her friend, Pete, threw out a casual, “How ‘bout that Lee Kiefer?” by text before she was able to catch it on replay. So, yeah, replays are great and everything; now someone has to figure out a way to block spoilers.

Of course, nothing is as easy, or free, as it first seems in the streaming world. We wanted to watch skateboarding so we clicked over to that section on the Roku Olympics site. We had to prove we had a live TV provider for NBC. Ours is Fios so we went to a PC, typed in the link to provide proof and punched in the on-screen code.

The Olympics are a prime showcase for the latest broadcast technology, too, and this year that’s HDR (high dynamic range) and Dolby Atmos sound. I found my HDR channels in the nosebleed section of my program guide, starting at channel 1491. We tried to do an A-B test with the regular NBC HD channel, 504, but it was hard to get a good comparison on men’s diving.

TV technology has gotten so good that the differences in premium TV features aren’t as readily apparent as they were in the transition from standard definition to HD. I think I saw a bit more detail in the HDR version on channel 1491 — individual beads of water in the hair of Great Britain’s Tom Daley and Matty Lee after they won gold for synchronized diving, for instance.

HDR’s biggest selling point is the ability to show details in really bright and dark scenes. It may shine most in outdoor events, which I haven’t seen yet. Sound for the major events is in Dolby Atmos, which Dolby calls “immersive” sound. Atmos at its best has an additional two speaker drivers that point toward the ceiling to give an added height dimension to traditional surround sound, but in my small apartment I don’t have room for front, center and rear-channel speakers, let alone ones with upfiring drivers. Maybe I’ll get Atmos in my next soundbar, but for now I (and a lot of other people without surround-sound speaker systems) won’t be able to enjoy the effects of Dolby Atmos. In an Olympics where COVID-19 has taken away the roar of the crowd, we won’t miss as much.

I appreciate the little Olympic “bites” available on NBC’s Peacock streaming service, also available from the Roku Olympics hub. I watched a half dozen highlights from Naomi Osaka’s second-round match before the segment moved on to the men’s freestyle swimming relay, where the U.S. men took gold. I may have hit repeat on Osaka’s match if I had known she’d be knocked out of competition in round three. The bites are compressed video which resulted in jaggies on the yellow pool dividers. For the most part, though, the video is pretty sharp.

We found the women’s street skateboarding final cycling through by sport, marveling that gold and silver medals went to a couple of 13-year-olds (from Japan and Brazil). I imagine we’ll see them again in four and eight years. I wish we could see Simone Biles again in four years, too. That’s one spoiler I didn’t mind hearing. I wouldn’t have wanted to see one of my Olympic heroes stumble and bow out after a much-anticipated event.

Cable TV is still the top choice for people watching the Olympics. I’m in that camp, too, because I can’t imagine experiencing the subtleties of a gymnastics event on an iPhone. Streaming is narrowing the gap and screen sizes are shrinking, though, says Zeta: 33% of viewers planned to watch the Olympics on a TV via cable vs. 28% streaming on mobile devices and 19.5% on a laptop. Maybe next time around, I’ll be watching on an even bigger screen with a Dolby Atmos system to get the best experience. I just wish Simone and Naomi could be there, too.

The post Consuming the Olympics is Easier with a Menu appeared first on EETimes. 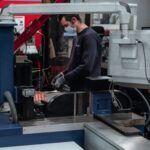