Community comes together to predict oxidation state of complex materials

Chemical elements make up pretty much everything in the physical world. As of 2016, scientists know of 118 elements, all of which can be found categorized in the famous periodic table that hangs in every chemistry lab and classroom.

Each element in the periodic table appears as a one- or two-letter abbreviation (e.g. O for oxygen, Al for aluminum), along with its atomic number, which shows how many protons there are in the element's nucleus. The number of protons is enormously important, as it also determines how many electrons orbit the nucleus, which essentially makes the element what it is and gives it its chemical properties. In short, the atomic number is an element's ID card.

In a paper in Nature Chemistry, chemical engineers in the School of Basic Sciences at the Ecole Polytechnique Fédérale de Lausanne (EPFL), Switzerland, investigate another number that must be reported for each element in the periodic table: the element's oxidation state, also known as oxidation number. Simply put, the oxidation state describes how many electrons an atom must gain or lose in order to form a chemical bond with another atom.

“In chemistry, the oxidation state is always reported in the chemical name of a compound,” says Berend Smit, who led the research. “Oxidation states play such an important role in the fundamentals of chemistry that some have argued that they should be represented as the third dimension of the periodic table.” A good example is chromium: in oxidation state III, it is essential to the human body; in oxidation state IV, it is extremely toxic.

The current state-of-the-art for predicting oxidation states is still based on something called 'bond valence theory'. Developed in the early 20th century, this estimates the oxidation state of a compound based on the distances between the atoms of its constituent elements. But it doesn't always work, especially in materials with crystal structures.

“It is well known that it is not only the distance that matters but also the geometry of a metal complex,” says Smit. “But attempts to take this into account have not been very successful.”

Until now, that is. In the study, the researchers were able to train a machine-learning algorithm to categorize a famous group of materials, the metal-organic frameworks, by oxidation state.

The team utilized the Cambridge structural database, a repository of crystal structures in which the oxidation state is given in the name of the materials. “The database is very messy, with many errors and a mixture of experiments, expert guesses and different variations of the bond valence theory are used to assign oxidation states,” says Smit.

“We assume that chemistry is self-correcting. So while there are many errors on individual accounts, the community as a whole will get it right.”

“We basically made a machine-learning model that has captured the collective knowledge of the chemistry community,” says Kevin Jablonka, a PhD student in Smit's group at EPFL. “Our machine learning is nothing more than the television game 'Who Wants to Be a Millionaire?'. If a chemist does not know the oxidation state, one of the lifelines is to ask the audience of chemistry what they think the oxidation state should be, by uploading a crystal structure, and our machine-learned model is the audience of chemists that will tell them what the most likely oxidation state is.”

This story is adapted from material from EPFL, with editorial changes made by Materials Today. The views expressed in this article do not necessarily represent those of Elsevier. Link to original source. 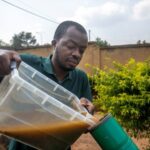 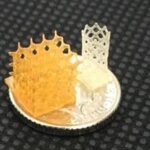 Novel 3D-printing resin gets into shape for tissue scaffolds