Normally, when it comes to radio-related projects, my home of New York City is a terrible place to be. If we could see and hear radio waves, it would make an EDM rave feel like a sensory deprivation tank. Radio interference plagues the metropolis. But for once, I realized I could use this kaleidoscope of electromagnetism to my advantage—with a passive radar station.

Unlike conventional radar,
passive radar doesn’t send out pulses of its own and watch for reflections. Instead, it uses ambient signals. A reference antenna picks up a signal from, say, a cell tower, while a surveillance antenna is tuned to the same frequency. The reference and surveillance signals are compared. If a reflection from an object is detected, then the time it took to arrive at the surveillance antenna gives a range. Frequency shifts indicate the object’s speed via the Doppler effect.

I was interested in passive radar because I wanted to put a new software defined radio (SDR) through its paces. I’ve checked in with amateur SDR developments for
IEEE Spectrum since 2006, when SDR become something remotely within a maker’s budget. The biggest leap forward happened in 2012 when it was discovered that USB stick TV tuners using the RTL2832U demodulator chip could be tapped to make very cheap but effective SDR receivers. An explosion of interest in SDRs followed. Building off the demand stimulated by this activity, a number of manufacturers have started making premium, but still relatively cheap, SDRs. This includes RTLx-based USB sticks built with better supporting components and designs versus the original TV tuners, and completely new receivers such as the RSPDx. Some of these new SDRs can transmit as well as receive, such as the HackRF One or Lime Mini.

I was researching diving back into SDR with one of these devices when I spotted the CrowdSupply campaign for the US $399
KrakenSDR. It’s receive only, but it boasts not one or two tuners, but five! The tuners are based on the RTL R820T2/R860 chip, and they are combined with hardware that can automatically do coherence synchronization among them. 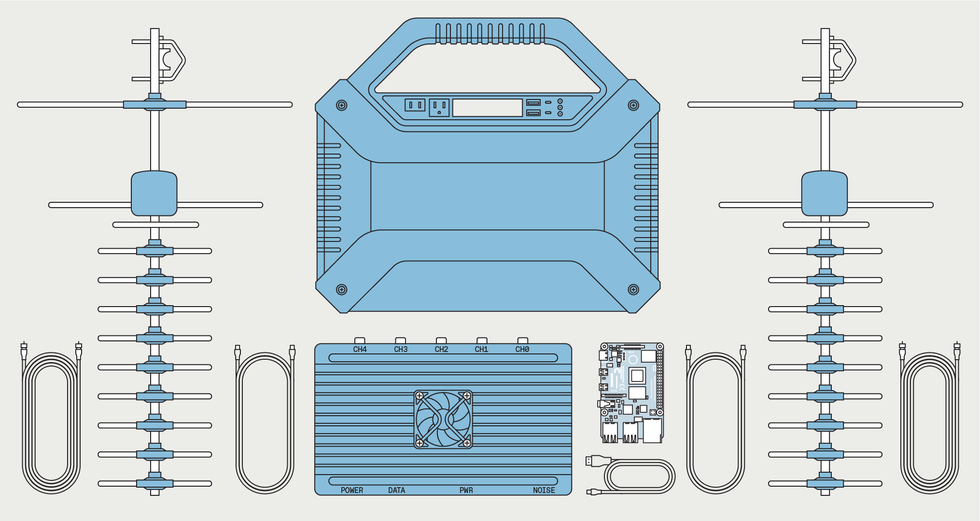 Both the KrakenRF SDR and the Raspberry Pi 4 [middle bottom] require a fair amount of power via USB C cables, so a battery pack [top middle] is needed for mobile operation. The Pi is connected to the SDR via a data link, and in turn the SDR is connected via coaxial cables to two directional TV antennas [right and left].
James Provost

But it was the KrakenSDR’s ability to do passive radar that really caught my eye as a new capability in lowish-cost radio tech , so I plonked down the money. The next step was to get suitable antennas. The radio’s manufacturer, KrakenRF, recommends directional Yagi TV antennas for two reasons. First, while the KrakenSDR can work with many signals including FM radio or cell-tower transmissions, digital TV signals are better to work with because they are fairly evenly distributed across the channel’s broadcast band, unlike the narrower and more variable signals from an FM station. (KrakenRF notes that if you
must use an FM signal, pick a heavy metal station “since heavy metal is closer to white noise.”) The second reason is that pointing a directional antenna away from the reference source means that it’s less likely to be swamped by the reference signal.

I ordered two small and light
$19 TV antennas. Portability was important because I needed to carry my entire setup to and from my apartment building’s roof, where my particular location in an outer borough of the city provided more advantages. First, the sky above has a regular supply of aircraft landing and taking off from NYC’s airports—and large metal assemblies moving against an uncluttered background are perfect radar test objects. Second, my roof has a line of sight to the Empire State Building, giving me the ability to choose as a reference signal any one of more than half a dozen TV channels transmitted from its spire.

I deployed my rig: a heavy-duty battery pack, the KrakenSDR, cables and antennas, along with a Raspbery Pi 4 to process data from the SDR. KrakenRF offers
an SD card image for the Pi that bundles an operating system configured to work with its preinstalled open-source software. It also sets up the Pi as a Wi-Fi access point with a Web interface. I really wish more companies would adopt this approach, as installing open-source software is often a frustrating exercise in trying to replicate the precise system environment it was developed in. Even if you want to ultimately install the KrakenSDR software somewhere other than a Pi, having a known-good setup is useful as a reference, and allows you to test the hardware.

Comparing the time between the arrival of a signal from a broadcast transmitter and the arrival of a reflection of that signal lets you detect objects such as airplanes and estimate their range. Frequency shifts between the two signals allow you to plot the speed of the object away or toward the antennas along with the range. The trace on the right shows a plane moving away as it increases its speed.James Provost

I pointed the reference antenna toward the Empire State Building and retreated with the surveillance antenna behind the superstructure of my building’s stairwell. This was in a bid to shield the antenna from the reference signal and myself from the wind. Checking the feed from the antennas using the Web interface’s built-in spectrum analyzer, I discovered I was almost
too successful in choosing the Empire State’s transmitter tower as a source of radio illumination: The reference signal was saturating the receiver with the default gain setting of 27 decibels, so I dropped it down to 2.7 dB.

But intense illumination means bright reflections. With one hand I pointed the surveillance antenna at the overcast skies and held my phone in the other. Gratifyingly, I almost instantly started seeing a blip on the speed-versus-range radar plot, matched a few moments later by the rumble of an approaching jet. (The plot updates about once every 3 seconds.) Because of the strength of the echoes, I was able to raise the signal-cutoff threshold significantly, giving me radar returns uncluttered with noise, and often with multiple aircraft. A win for SDR!

Admittedly, my passive radar setup doesn’t have much everyday value. But as a demonstration of how far and fast inexpensive SDR technology is advancing, it’s a clear signal.

This article appears in the November 2022 print issue as “Passive Radar With the KrakenSDR.” 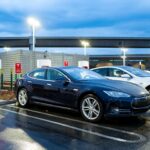