The Department of the Interior will not hold sales of oil and gas leases for millions of acres off the coast of Alaska and in the Gulf of Mexico, the agency confirmed on Wednesday. That’s good news for the climate, but experts warn that the U.S. is still not doing nearly enough to limit new oil and gas production to keep warming below catastrophic levels.

The department dropped its plan to lease about a million acres in Cook Inlet in Alaska due to a “lack of industry interest,” Interior spokesperson Melissa Schwartz said in an email to the Washington Post. Two more lease sales planned for the Gulf of Mexico will also be canceled, she added, due to a lack of time and legal issues.

The federal government’s current offshore development plan expires at the end of June. Once it lapses, the Department of the Interior cannot issue any new offshore leases until a new plan is in place. The federal government is legally required to create a new plan, but the Biden administration hasn’t proposed one yet, meaning lease sales likely won’t resume until 2023 at the earliest.

Before the election, President Biden promised voters: “No more drilling on federal lands, period.” In January 2021, he signed an executive order pausing oil and gas leasing on public lands and offshore waters. But then 13 states with Republican attorneys general sued the administration, and a federal judge in Louisiana blocked the temporary moratorium.

After that ruling, the administration went ahead with an 80-million-acre lease sale in the Gulf of Mexico. But then, complicating matters further, a federal judge in Washington D.C. invalidated the leases, finding that the Department of the Interior had not taken the effects on the climate into account when issuing them.

Last month the Biden administration resumed selling leases for oil and gas drilling on 145,000 acres of public lands, but raised the royalty rate that oil and gas companies must pay the federal government by 50 percent.

Republican politicians and oil industry leaders used the news of the canceled offshore lease sales to pounce on President Biden, accusing him of restricting oil supplies and not doing enough to rein in high gas prices. Congressman Bruce Westerman, a Republican from Arkansas who sits on the House Natural Resources Committee, said in a statement: “I can’t imagine a more tone-deaf, shortsighted decision that jeopardizes our economic and energy security without doing a single thing to help the environment or the American people.”

But even if the lease sales had gone ahead, the wells would not have produced oil for years, doing little to ease prices today. And it’s not the federal government that’s preventing oil companies from bolstering supply right now. Rather, the industry itself has chosen not to increase production from wells and leases that they already have. After years of relatively low fuel prices and the shock of the pandemic, oil companies are now raking in record profits. ExxonMobil reported profits of $5.5 billion last quarter — twice as much as the company brought in during the same period a year ago. Chevron’s quarterly profits surged to the highest amount in nearly a decade ($6.3 billion), and Shell reported its highest quarterly earnings ever ($9 billion).

While companies have little incentive to increase supply now, they do plan to continue developing new sources of oil and gas in the future. The same day that the Department of the Interior called off the lease sales, The Guardian released a bombshell investigation revealing that major oil and gas companies have plans to develop 195 new projects across the world that would generate the equivalent of about 18 years worth of current global emissions. Twenty-two of the planned projects in the U.S. would contribute more than a fifth of those emissions.

If these projects around the world go ahead — as it appears they will, barring significant action from governments — they will blow up any chance we have of keeping warming below catastrophic levels.

Last year, the International Energy Agency made it clear that nations around the world need to immediately halt new coal, oil, and gas development. While the Department of the Interior’s announcement that it will not lease millions of acres off the coast of Alaska and in the Gulf of Mexico is a step in the right direction, it’s clear that the U.S. is not yet on track to substantially reduce emissions.

This story was originally published by Grist with the headline Biden calls off oil and gas leases in Alaska and Gulf of Mexico — but not for the climate on May 13, 2022. 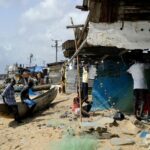