Across the bay from San Francisco’s glittering downtown sit two large petrochemical refineries spewing more than 550 tons a year of particulate matter — which can cause deadly cardiovascular and respiratory illnesses — into the air and communities nearby. The Chevron refinery in Richmond and PBF Energy refinery in Martinez are responsible for 11 percent of all particulate matter emissions from facilities regulated by the Bay Area Air Quality Management District, or BAAQMD, the local air emissions regulator. For years, community advocates have been trying to get the district to crack down on the two operations’ pollution.

On Wednesday, they were handed a decisive win. In a 19-3 vote, the 24-member board of the air district voted to require the facilities to reduce particulate matter emissions dramatically, giving the companies five years to achieve a 70 percent reduction combined. The stringent standards can be met by installing wet gas scrubbers, a type of equipment that pulls particulate matter out of the emissions stream and is estimated to cost approximately $250 million to install. The measures will also result in $26 million to $59 million in health benefits to the residents of the surrounding communities, who are predominantly Black, Hispanic, and Asian, according to modeling conducted by the air district.

“The people win today,” said Andres Soto, an organizer in Richmond with Communities for a Better Environment. “This is a tremendously historic development for environmental justice, climate, and racial advocates in the Bay Area.”

Particulate matter is a deadly pollutant consisting of tiny particles of solids and liquid droplets. The BAAQMD rule places limits on PM10, particulate matter that is 10 micrometers or smaller, which is about seven times smaller in diameter than a strand of hair. These fine particles are inhalable and can get lodged deep in the lungs and even enter the bloodstream. Research has found that exposure to particulate matter can cause a whole host of respiratory and cardiovascular diseases, including lung cancer, asthma, and heart attacks. In children, exposure to the pollutant stunts lung growth.

Amanda Millstein, a pediatrician in Richmond, said she has seen firsthand the impact that living in the shadow of the Chevron refinery has had on families and children. “I’ve lost track of cases where I’m meeting a baby for the first time, and one of the first questions is, ‘Does my baby have asthma yet?’” she said. “The pollution that people are exposed to and that expectation is just not normal.”

The rule change was highly controversial and drew more than 8 hours of public comments over two days from Bay Area residents, doctors, teachers, refinery workers, union members, and oil and gas industry representatives. Representatives for the refineries raised multiple concerns with the particulate matter standards, stating that the new rules will force them to shut down, lead to job losses, and that the air district’s environmental analysis was faulty. They also raised concerns about the amount of water required to run wet gas scrubbers, considering that California is in the midst of a historic drought. BAAQMD staff estimated that the scrubbers will use between 120,000 and 430,000 gallons of water per day.

“In light of the past and ongoing droughts in California, a thorough evaluation of the availability of potable water supply is necessary and has not been performed,” Michael Carroll, a lawyer representing Chevron, wrote in a 111-page letter to the BAAQMD board. The letter also included the threat of litigation if the stricter limits were to be adopted.

Millstein said that the refineries were “preying on fears about the drought.” The refineries already use a tremendous amount of water in their normal operations, and BAAQMD staff have estimated that the additional water required to run the scrubbers will be nominal — an increase of approximately 3 to 4 percent.

The new rules “will save lives,” Millstein said. “It will make my patients immediately healthier.”

Brian Hubinger, a public and government affairs representative at Chevron, said that the board members based their decision “on erroneous data” and that “the rulemaking effort is so flawed that we will investigate our legal options to ensure we can meet environmental goals, continue to provide fuels that meet strict environmental standards, and save energy jobs in our community.” Representatives for PBF did not immediately respond to Grist’s requests for comment following Wednesday’s vote.

Soto, the community organizer, said he expects that the refineries will sue as they have done numerous times in response to BAAQMD rules. These efforts were not successful, and “their ability to mobilize lawyers is another example of industry avarice,” he said. “We call on industry not to drag their feet and not delay complying with the rule.”

This story was originally published by Grist with the headline Bay Area regulators just delivered on a promise to help frontline communities breathe easier on Jul 22, 2021.

If everything is burning, when does it make sense to rip out a pool? 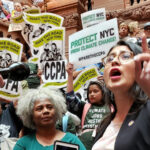 The next test for environmental justice policy? Defining ‘disadvantaged communities.’