Disinfecting classrooms took on a whole new level during the COVID-19 pandemic, with teachers and staff expected to wipe down desks and shared spaces constantly. One capstone team in the Department of Biomedical Engineering at Texas A&M University designed a more efficient way to clean classrooms to battle the pandemic and other illnesses.

The team built a low-cost, small-footprint ultraviolet (UV) robot. The robot autonomously travels through a room and emits UV light onto surfaces. UV light is a type of radiation and has been proven to kill germs like bacteria and viruses successfully. The team aimed to find a solution that was more efficient and safer than chemicals or other disinfectants.

“It will also give a lot of parents better peace of mind sending their kids to school,” Emily Clark said. “There are already so many measures being taken to disinfect schools, so this would be one that people could put faith into and trust.”

Larger-scale versions of this type of robot exist in large hospitals and institutions, but they cost hundreds of thousands of dollars, which the team said is not affordable for publicly funded institutions like schools.

“So many times, so many facilities or countries can’t afford these million-dollar machines, and it’s so important — especially now considering we’re in the middle of pandemic — that we have sanitation and the means to sterilize things,” Johanna Webb said.

The device can combat not only the COVID-19 virus, but also other germs and bacteria such as strains of the flu. Along with schools, the device could also have applications in retirement homes and other public areas where individuals may be more susceptible to illness.

“I doubt that the enthusiasm and interest in something like this will disappear entirely once we get a handle on COVID and other things,” William McFadden said. “It’s applicable throughout regardless of what our current pandemic situation is.”

The team’s sponsor is Dr. Saurabh Biswas, associate professor of practice in the department and executive director for Commercialization and Entrepreneurship at the Texas A&M Engineering Experiment Station. The team said while Dr. Biswas did give them requirements for the project, he gave them creative freedom on how the final prototype was designed. 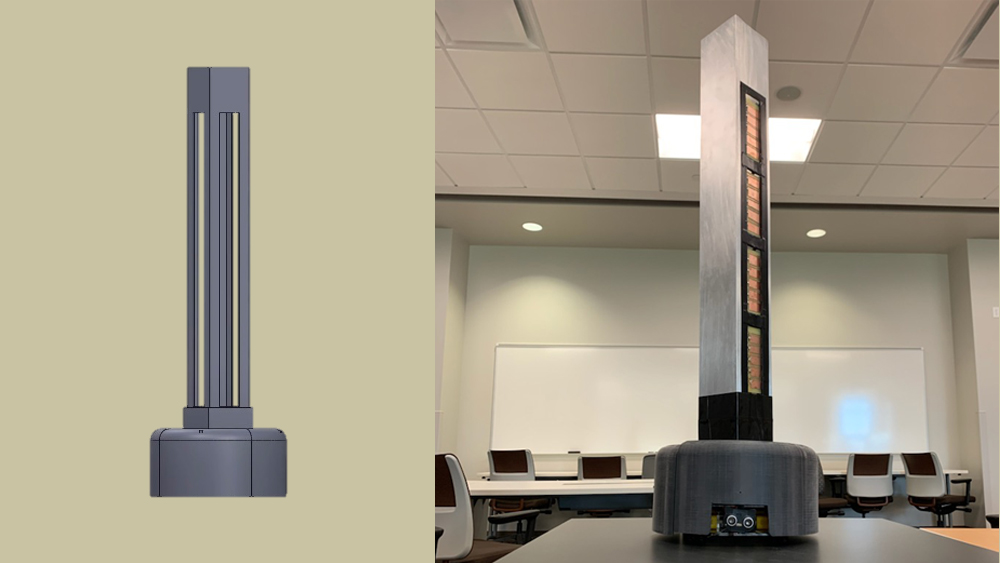 A demonstration of how a prototype goes from design to prototype. The left image is a SOLIDWORKS representation of the team’s UV robot and the right image is the final prototype. Courtesy: Mashal Mithani, Texas A&M University

Donald Bowen said the team also reached outside of the university for feedback.

“My sister-in-law used to be first-grade teacher, and she did some time during COVID,” Bowen said. “She told me about cleaning off the desks and how her coworkers have to do all this sterilization, so we got a feel for how this device would be used. Getting this kind of information during the design input phase helped us learn how users would want to use the device.”

The design involves a flat base with a tower about three feet tall made out of an aluminum shell to help dissipate heat from the LEDs, which will be seated on top of the tower. By having the device be tall, the lights will reach above desks and hit different areas.

The team faced a variety of challenges throughout the project, from figuring out costs so the device can still be affordable to schools to ensuring the LEDs were the correct quality to provide cleansing. Chris Weber said on top of the design challenges, the team had to overcome being unable to meet in person often due to COVID-19 restrictions.

“We overcame this partially due to a very detailed timeline that split up work and kept us accountable for meeting different deadlines,” Weber said.

Reflecting on the last two semesters, Yue Qiu said the teamwork and problem-solving experiences would impact her the most.

“Since I’m going to do research, it is unavoidable to work with other people. Also, the problem-solving experience will be useful since it is similar to the research process,” Qiu said. “It is because both the problem solving and research process requires us to think and try repetitively, and we might keep failing until we successfully find a way.”

Mashal Mithani said she believes the greatest impact people can have is on human life.

“The most selfless thing we can do is help others live their life to the fullest and improve their quality of life the best that we can,” Mithani said. “And I know I would find fulfillment in my career and in my life if I had a hand in doing that.”