A key challenge in the modern automobile is dealing with the increasing software. Today, there are more lines of code in the connected car than other highly sophisticated machines, including the U.S. Air Force F-35 Joint Strike Fighter, Boeing 787 Dreamliner, or the U.S. Space Shuttle.

The automotive industry is driven by a group of megatrends: automation, connectivity, electrification, and sharing, commonly referred to as ACES. ACES represents a new opportunity for the automotive industry to meet an entirely new set of challenges, but together they point to increasing software complexity.

Hardware today is more powerful and, as a result, millions of lines of code can be executed through a multitude of systems to perform complex functions inside the connected car. Soon these vehicles will communicate externally by way of vehicle-to-vehicle (V2V) and vehicle-to-infrastructure (V2I) communications. Safety and security are paramount concerns, so all onboard systems must be secure while the vehicle is in motion — or sitting idle.

Cybersecurity threats are ever-increasing
The “2020 Automotive Cybersecurity Report” (figure 1) from Upstream Security depicts a six-fold increase over a nine-year time period with numbers doubling from 2018 to 2019. The graph depicts a 94% year-over-year growth in cyberattacks since 2016. New business models will have to evolve as complexity, reliability, risk, and liability become primary drivers.

The increased effectiveness and proliferation of automotive cyberattacks have created a new urgency for security solutions, driving new regulations by lawmakers to prevent cyberattacks globally. The U.S. Security and Privacy in Your Car Act, or the “Spy Car Act of 2017,” defines requirements for protection against unauthorized data access and reporting. The bill directs the National Highway Traffic Safety Administration (NHTSA) to issue vehicle cybersecurity guidelines that require motor vehicles manufactured for sale in the United States to build in protection against unauthorized access to electronic controls and driving data.

Also in 2017, the U.S. House of Representatives passed H.R. 33886, “The SELF DRIVE Act,” a first-of-its kind legislation to ensure the safe and innovative development, testing, and deployment of self-driving automobiles. China established an automotive cybersecurity committee to ensure the safe operation of intelligent, connected and electric cars, including research, standards, policies, laws, and regulations. Other data regulations are beginning to emerge, such as the EU’s GDPR, Canada’s Digital Privacy Law (PIPEDA), and the European Parliament Transport Committee’s call for EU regulation on access to car data.

Mapping attack surfaces to a vehicle’s architecture (Figure 2) depicts attack surfaces corresponding to a vehicle’s architecture. This basic schematic highlights connectivity within the car, including the use of automotive gateways and multiple vehicle buses, and different types of domains: infotainment, active safety (containing cameras and radar), and body. Chassis and powertrain ECUs utilize a controller area network (CAN) bus that can be easily exploited. Also shown are a variety of buses to communicate data within the central gateway. The central gateway ECU is a focal point of attack because of its direct exposure to the outside world.

It is quite clear that modern connected cars have multiple entry points, which hackers view as both a challenge and opportunity. To prevent any type of cyberattack, all entry points must maintain an appropriate level of security.

Security can be broken down into three aspects. The first aspect includes authentication and access control. Authentication means who is allowed to do things inside a vehicle. Access control is what the individual or system is allowed to do once inside. The second aspect to security is protection against illegitimate access, data leakages, or harmful software or Trojans from being installed. The final aspect to defining security is to detect and report security incidents. 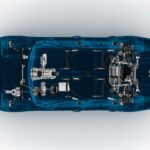 How Software Is Eating the Car