Distributed propulsion systems divide thrust generation into many small engines spread out along the span of the wing. Tailoring the power distribution configuration in this way could benefit cruise, as well as take-off and landing performance but also noise emissions. And the use of distributed engine thrust could enable aircraft flight control concepts to be redefined.

According to Jean-Brice Dumont, executive vice president of engineering at Airbus, the EcoPulse demonstrator is increasing knowledge of distributed propulsion systems, paving the way for electric and hybrid-electric, emission-free aircraft. The wind tunnel tests will enable Airbus to align simulation models with actual performance to validate future configuration choices and technologies.

“The EcoPulse wind tunnel tests allowed us to evaluate the performance characteristics of the propeller and the cooling process of the electric engine. To achieve this, we assembled the engine provided by Safran, the Airbus nacelle, and the propeller provided by DUC Hélices that will be installed on the actual demonstrator aircraft, in the wind tunnel. We then used large powerful fans to blow air (at differing speeds) over and around the model. By doing this we were able to take actual measurements and capture real-time data,” explained Tim Axford, head of the Airbus Wind Tunnel facility at Airbus UK.

“We looked at the different levels of power and revolutions per minute (rpm) for the engine, measuring the thrust and the force on the propellers. We also looked at the propeller wake or airflow behind the engine. This gave us a set of experimental data to better understand the interaction between the propeller and the wing” Axford said. “Electrical engines generate heat while running, requiring a cooling system to lower temperatures, on the ground and in flight. In the wind tunnel, dedicated engine and air temperature measurements were recorded to assess the effectiveness of the cooling technologies.”

The observations and data collected during the wind tunnel tests will allow Airbus and its partners to better estimate the power consumption of the propulsion system, and consequently the final energy performance of the aircraft demonstrator.

“The precise figures of the propeller performance will be taken into account for the creation of the Airbus Flight Control Computer software, one of the next steps” said Matthieu Scherrer, Airbus EcoPulse project leader.

In the coming months, Airbus, Daher and Safran will work toward achieving the Critical Design Review (CDR), which will give way to the start of the production of the EcoPulse demonstrator, ahead of ground testing early 2022.

Launched in June, 2019, the EcoPulse demonstrator is scheduled to make its first flight test flight by summer 2022.

United’s supersonic planes would be a ‘massively polluting’ disaster 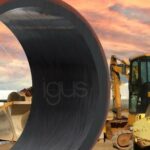 Flowmeters in the Cloud and Roller Screws on Mars? Nice Supplier News