With more than 92 percent of the UK's energy coming from fossil fuels, it is hardly surprising that the oil and gas industry is the biggest contributor to offshore construction activity.

According to the Marine Biological Association of the United Kingdom's (MBA) annual Marine Health Check report, the UK's marine biodiversity is still very much under threat. The offshore energy industries, singled out by the MBA's report as being among those most capable of causing harm, will have to tread very carefully, particularly with the new Marine and Coastal Access Act receiving Royal Assent in November 2009.

Historically, one of the main challenges marine biologists and offshore developers face is managing the individual consents applications for the complex web of legislative bodies. The new UK Marine and Coastal Access Act will hope to make a difference by providing leadership at a national level. MBA marine environmental change network coordinator Matthew Frost is hoping the new legislation will yield 'win-win' scenarios. “If a structure is planned correctly so that the impacts are localised and minimal, you can achieve something quite useful for marine protection, and, at the same time, aid sustainable harvesting from the ocean,” he suggests. “There has to be a balance between the environment and what society wants.”

Marine biologists are often under pressure to produce EIAs to extremely tight deadlines, and the pressure is frequently compounded by logistical nightmares such as vessel costs, complex equipment requirements and, of course the weather and its effect on workable wave and swell conditions.

To find out more about the world of the marine biologist, I accompanied RSK Group into the field for its ongoing engagement at Shell's Corrib Gas Field Development. A project of international significance, the gas field, located 80km off Erris Head in County Mayo, has the potential to supply up to 60 per cent of Ireland's peak gas demands. It will comprise an offshore seabed installation (wellheads and manifold at the gas field) and an 84km pipeline from the gas field to a landfall. From here an onshore pipeline will run to a newly constructed gas terminal at Bellanaboy Bridge. Treated gas will then will then be exported via a 150km pipeline running between Mayo and Galway.

The onshore pipeline is still under review, but the offshore pipeline has been laid to a landfall in the inner parts of Broadhaven Bay near the village of Pollathomas. As a condition of the project, Shell is required to conduct pre-and post construction monitoring studies both at the landfall and offshore.

RSK Group has been involved in the project since 2000, when it was commissioned to undertake EIAs for both onshore and offshore aspects. As the offshore pipeline has been laid up to the landfall, Shell is currently in the process of conducting post-construction monitoring studies.

I walked along the beach with RSK Group senior marine biologists Andrew Bendell and Alec Moore, and Shell environmental adviser Leo Brogan. It is October and it is very cold. The beach is in an area of stunning natural beauty, with rugged cliffs and stacks dipping down into the clear blue waters of Broadhaven Bay. But it is also a harsh environment, and the sloping hills around are barren and weather-beaten from constant exposure to the North Atlantic weather.

Moore gives me a quick run through of the day's events, which will include taking core samples from nine stations, on three transects on the shore near the landfall. The area is notable for its marine mammals, a fact confirmed by the couple of seals that watch us curiously from a half-submerged sandbank. Marine mammal observers have been present in the bay throughout all construction work. In addition, RSK Group has managed a long-term study of marine mammal behaviour both during and outside construction seasons.

Bendell uses a GPS system to precisely locate the nine stations, which are positioned on the upper, mid and lower shores. A total of 36 samples will be taken, four from each station, and stored in buckets.

The coring is performed by pushing a short piece of plastic tubing into the sand, twisting it, pulling it out and then pouring approximately 1.5l of sediment into a bucket.

During offshore studies, RSK Group will take sediment samples from stations perpendicular to the pipeline using a grab sampler, and underwater video footage using a drop-down camera, to provide supplementary information on the underwater environment. Once samples for invertebrate analysis are collected, they are each separately put through a 0.5mm sieve to remove smaller particles and animals.

These macrofaunal inverterbrates are identified and enumerated, and results from the post construction survey will be compared to samples collected pre-construction. Diversity and abundance of Macrofauna (a size-based classification of invertebrates), provides a good indication of whether or not there have been changes to the environment. The residue is collected in sample pots and formaldehyde solution is poured in to preserve any animals. The preserved samples are then sent off to a taxonomic laboratory for microscopic identification. All results are included in a monitoring report for Shell.

The Corrib project is no different, and, following the initial studies in 2000/2001, the RSK team went out into the field in 2007 to conduct a thorough two-week survey of the length of the pipeline route from the field, up to the top of the intertidal zone. A study was also performed in the area of a proposed small treated water outfall pipe further out in the bay.

Richard Foote is a freelance journalist. RSK Group is based in Glasgow, United Kingdom. www.rsk.co.uk 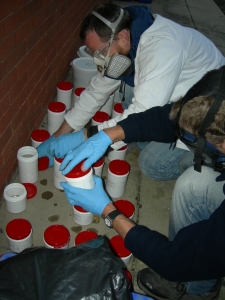 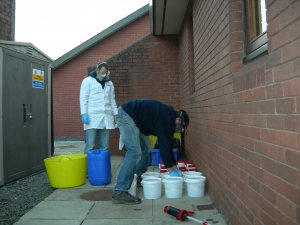 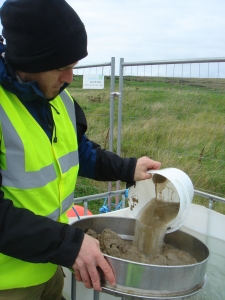 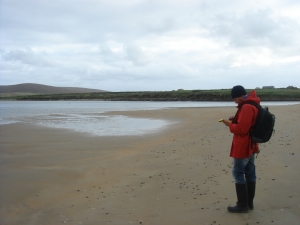 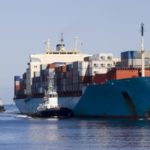 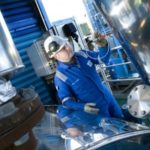