Where Are All the Mobile Developers? 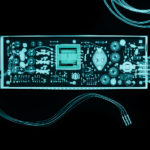 A Half Century Ago, Better Transistors and Switching Regulators Revolutionized the Design of Computer Power Supplies